The "Yama, Hoko and Yatai Float Festivals" of Japan are now included in the Representative List of UNESCO Intangible Cultural Heritage for Humanity!
The entry includes a total of 33 festivals of 18 Japanese prefectures, from northern Tohoku to southern Kyushu, with Aichi touting the status of "Float Festivals Number 1", contributing with FIVE Listed Events!
What’s do great about them? What kind of festivals are these? Keep reading to the answers to those questions and more!

First of all, what’s a Registered Intangible Cultural Heritage?

"Cultural Heritage" is a term we hear a lot. This is a certification for buildings and ruins deemed to possess universal value according to the Convention on the Protection of the World Cultural Heritage and Natural Heritage and, in Japan, it is currently the case of Himeji Castle, the Historic Villages of Shirakawa-go and Gokayama, the Sacred Sites and Pilgrimage Routes in the Kii Mountain Range and other 20 such places.
On the other hand, a heritage deemed to possess universal value even without a concrete form, like entertainment and tradition such as folk music and dance, social habits, rituals, traditional crafts, culture and etc., is certified as Intangible Cultural Heritage. In a recent case of 2013, the Washoku Japanese Cuisine was added to the list by UNESCO.

Why are there so many "Yama, Hoko, Yatai, Float Festivals"? 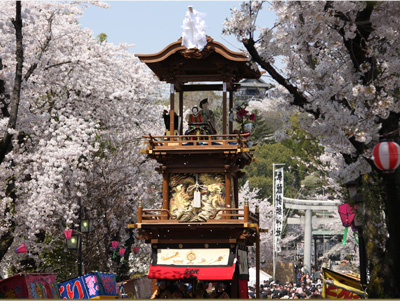 This time, UNESCO registered 33 festivals from 18 Japanese prefectures as a single Intangible Cultural Heritage. This includes the already registered "Yamahoko Floats of the Kyoto Gion Festival" and "Hitachi Furyumono Festival", as the goal was to group these festivals, which are still held around the whole country to this day, and submitting them all together as an expansion of that entry. Although it is believed that the Gion Festival of Yasaka Shrine in Kyoto was indeed the birthplace for all the festivals using floats, is also acknowledged that the "Yama, Hoko and Yatai Floats" custom spread across the land by taking a myriad of variations, such as Yamaboko, Hikiyama, Kasaboko and others, proving that those festivals were original creations and not simply derivatives.

Why were the festivals approved to the list? What’s so great about them? 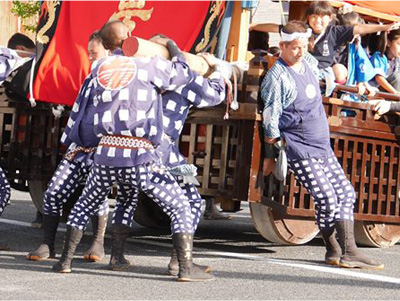 "Yama, Hoko and Yatai Float Festivals" are traditional events that the townsfolk of each respective area execute together by gathering their region’s cultural styles. In order to continue carrying them out, much is done regarding succession for performing arts, or preservation for cultural properties, and even transmitting abstract values and etc. All those activities play an important role in connecting the community across generations. Furthermore, traditional craft techniques such as woodworking, metalworking, lacquer, dyeing, etc. are preserved in the floats for centuries on, in order to keep exhibiting their splendid appearance. Also, in all cases it is possible to detect a carefully respected, strong dedication amongst the community’s people towards the rituals. It all makes them recognizable regarding their protection and succession in a enduring, sustainable way.

Countless lanterns reflected in the calm waters add to the mystical air! 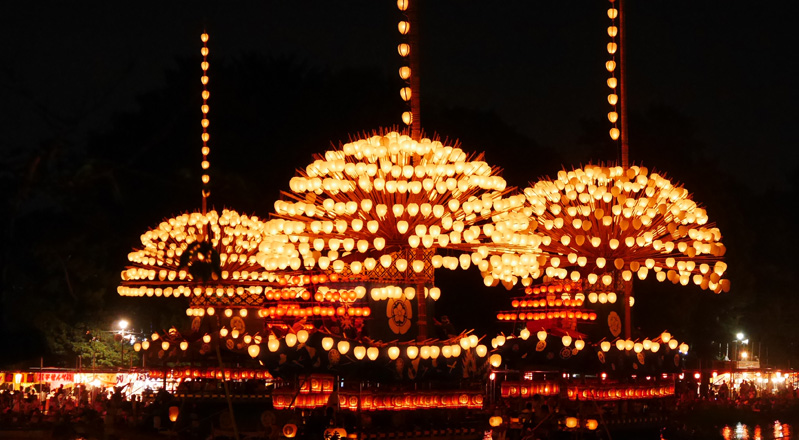 Owari Tsushima Tenno Festival Danjiri Boat Event This festival of Tsushima Shrine has 600 years of history. It ranks among the three largest river festivals in Japan, and is often said to be the most gorgeous of all the many summer festivals held around the country.

What’s with all those Chochin lanterns?

The dome shaped arrangement features 365 lanterns, one for each day of the year - but it actually has between 400 and 420 for a beautiful round shape. The 12 or 13 lanterns soaring to the sky are the months of the year. Under the orange-yellow dome, near the place where the temple acolytes "chigo" children sit, 30 more for the days of a month. The operation of lighting up and hanging the lanterns is a veritable display of craftsmanship worth watching carefully! Also during that time various events including the beautiful fireworks are held and add to the memorable experience.

A Joruri Puppet show aboard the float that's unique in Japan! 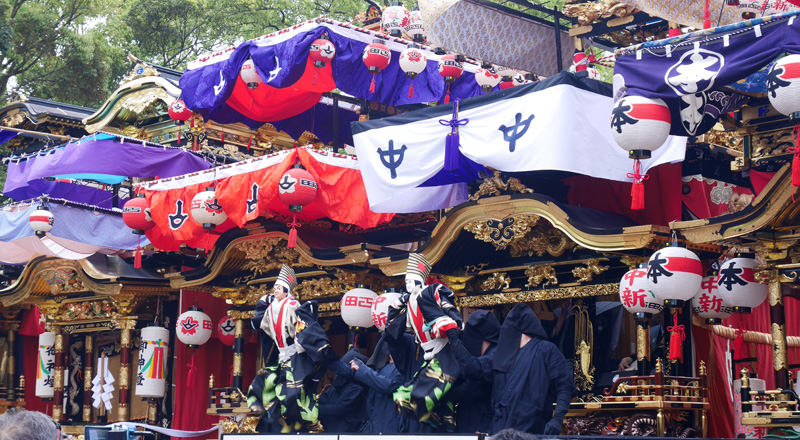 •Chiryu Festival, annually on May 2nd (Shigaku Pre-Festival) and 3rd (Honraku Main Festival)
•Float Bunraku performance during the Honraku within the grounds of Chiryu Shrine

Floats measuring 7 meters tall and weigh 5 tons a piece are brought out from five towns. In the Hon-Matsuri festivals held once every two years, after the floats have progressed through the streets to the sound of the so called "kamimai" festival music quite as though they are going to squash the eaves of one house after another, the floats go into a shrine, and float bunraku and karakuri shows are performed.

Bunraku, also called Joruri - a theater with dolls manipulated by three puppeteers - are performed in several locations across the country, but performed aboard a float during a festival is only done in Chiryu. This Yama-Bunraku has roots in the Edo Period, and has oved 260 years of tradition. Currently, four floats from the districts of Nishi, Yama, Nakajin and Takara perform classic routines such as Sanbaso, Keisei-Ana-no-Naruto, Tsubosaka Kannon Reigenki, Shinrei Yaguchi-no-Watashi, among others. 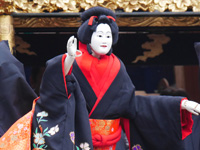 Different from Karakuri dolls from other regions, the Chiryu dolls are not made by karakuri artisans, being rather a joint effort among the townsfolk by patching up together wooden fragments, pieces of cloth and other materials. And instead of springs, these dolls are operated by strings. Depending on the performance, each doll may require up to 10 puppeteers, a great artistic feat.

The breathtaking manoeuvres of 13 gorgeous floats! 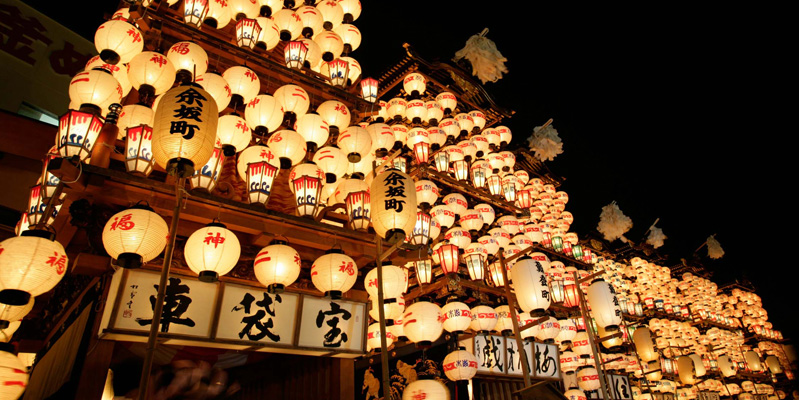 •Annually on the first Saturday and Sunday of April

Records of this event as regular ritual of Chiryu Shrine date from the Edo period (17th Century) and the stars are the 13 gorgeous floats. It is the only festival in Japan in which doll joruri performances and karakuri puppet shows are given from the top of floats.

Keep an eye for the gorgeous floats!

Thirteen splendid floats, all of them with three tiers, give karakuri doll performances that have been passed down since the Edo period, to the sound of flute and taiko music and with the Sakura Cherry Blossoms as setting. At night, all the floats weave their way through avenues as they parade through the castle town, each of them bearing countless glowing lanterns. 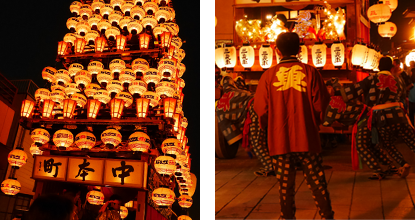 The "Matsuri Otoko", or Festival Guildsmen, synchronize their actions and on a single breath lift and rotate the 5-ton float changing its direction. When the operation is successfully finalized, the crowd burst in cheers!

Another direction-changing manoeuver in which the float is pushed sideways and the wheels screech in a loud, rattling sound. Happens in each corner of the course leading to the front of Inuyama Castle.

Five floats trudge the beach while exhibiting their artistic richness! 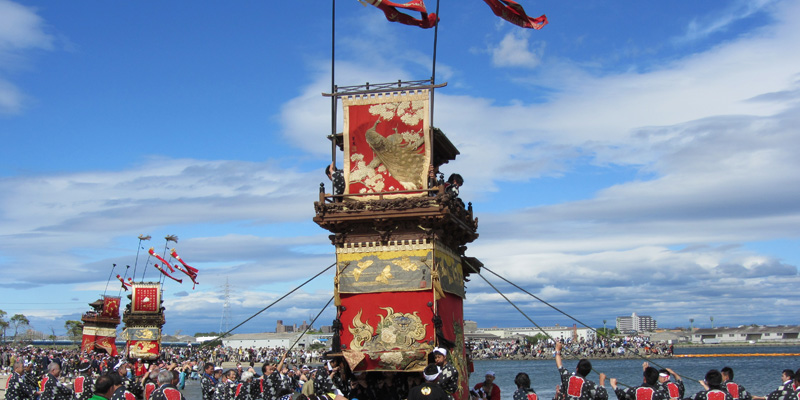 Held annually for over 300 years, on the hallowed grounds believed to be where legendary Emperor Jinmu came ashore from Kyushu, during his expedition eastward to claim his sovereignty, the Kamezaki Shiohi Festival is a grandiose tribute to both the Emperor’s legend and the unrelenting human power!

Must see! The exhilarating journey of the floats by the beach!

The festival’s climax Hikioroshi is when the floats are pushed to the beach: hundreds of men wearing the traditional garments emblazoned with each respective guild’s seal, push and pull the hefty carriages to the sea border using ropes or their bare hands, in a monumental display of force.

Chants and applauses accompany each movement of the floats 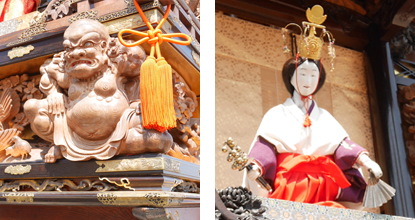 Features elaborated and visually powerful white wood carvings made by renowned artisans who were active from late Edo to early Meiji periods. The "Rikijin" statues of muscular gods on the "Danbako" side panels are a must-see!

Famous for the Karakuri Puppet Doll performances staged on both front and rear or the float. The "Kairaishi" puppet doll of the Kagura-Guruma float is the only extant exemplar from Takeda Karakuri and extremely precious.

The climactic events of a 100 day-long ritual! 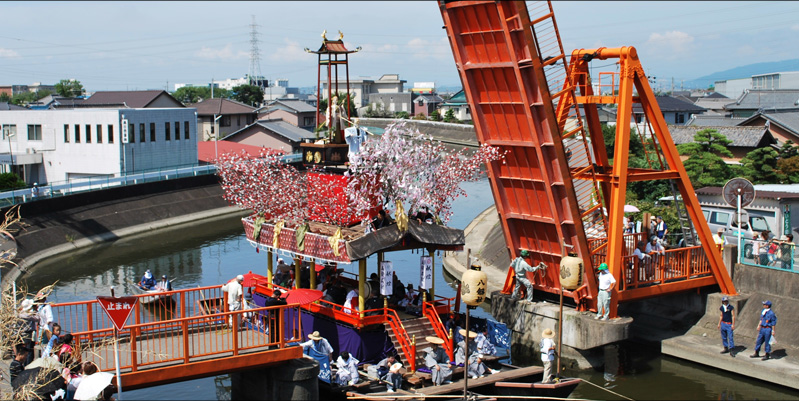 The Sunari Matsuri Festival is held jointly by the Tomiyoshi-Tatehaya and Hakken-sha shrines. Several rituals are held during 100 days or so prior to the main event, earning its nickname of "100-Day Festival". The Yoi-Matsuri Eve Festival sees boats festooned with the lit up Chochin lanterns. Then, the Morning Festival has boats with Takasago dolls and Hayashi festival music players going up the river.

From Eve-Festival to Morning Festival, a charming mood change

After preparations are done at the Community Center, the ship, with its Chochin lanterns lit up, depart from Kazaribashi Bridge and goes upstream towards Tennobashi Bridge, all to the sound of festival music. Midway of its course it will stop at Miyoshibashi Bridge and wait for it to be lifted in order to proceed. This is the only time of year this bridge is operated. When boat reaches the Tenno Bridge, red lantern shells and rice cakes that adorned the vessel are distributed to the crowd by throwing them.

The Morning Festival with Danjiribune Boats

With its decoration changed from Makiwarabune to Danjiribune - flowery tree branches instead of lanterns - the boat is boarded by Children Acolytes "Chigo" at Kazaribashi Bridge and, again, depart towards Tennobashi Bridge. There, the boat passengers disembark and, in procession, head to the shrine by the sound of the music. 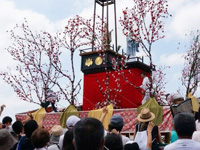 By the time the Tenno Hayashi music ends, back at the shrine, the plum and cherry blossom branches that decorated the boat are gathered, blessed and thrown to the crowd. It is believed that decorating the house with them will ward off lightning bolts and strengthen relationships.