Discovering new ways to enjoy it: the Craft Center!

Getting hands-on at the Noritake Garden!

I used to live near the Noritake Garden, so often I found myself at that inviting and always well-kept park whenever the weather was clear. Be it to take the kids out of the house, or to have lunch at the facility’s fancy restaurant with friends, I pretty much considered myself as someone who knew that place very well. Well, I can’t help but feel a bit ashamed of that, as I discovered that the really interesting part of Noritake Garden is the Craft Center!

The rendezvous was at the Welcome Center. We were greeted by the knowledgeable Mr. Kikuo Suzukawa, Lead of Administration and Planning of Noritake Garden, and the charming Ms. Hideka Chinzei, from the Noritake Company’s Public Relations department. After introductions, they took us to a comfortable projection room for a brief Noritake Garden presentation movie. We watched it quite casually but, as we later realized, depending on how well you assimilate the Noritake tale of this feature, the enjoyment you get from this awesome facility changes drastically. 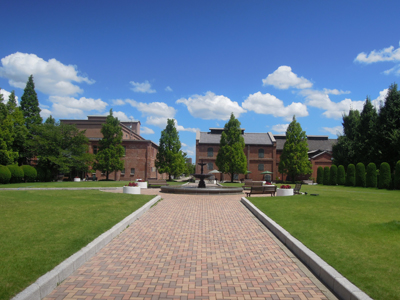 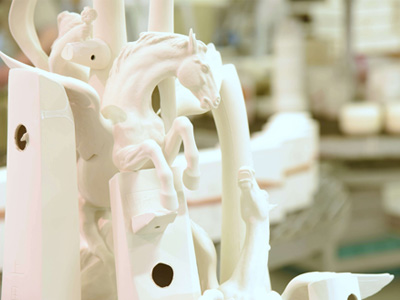 With no further ado, we moved to the Craft Center. When I saw that a 500-yen admission fee is charged it dawned on me that I was entering new territory: a few more steps and we were inside a complete Noritake Bone China Factory. Amidst an overwhelming volume of information, I soon learned that “bone china” is not so called because it is white as bones, as I always thought, but rather because they are made from actual animal bone ash, usually cattle, making it something very different from other less complex earthenware. Oh, there comes that shaming feeling again!

At the First Floor we were able to see the manufacture of the original product models which in turn are used to make molds, and how the molds are made, as well as the several forming processes used to actually produce the porcelain pieces: slip casting, plastic forming, pressing, etc. I was amazed at how some intricately complex porcelain statuettes were made from a single multi-part mold set! Then, after the slip cast pieces are released from the mold, very skilled artisans delicately wipe and soothe the seam lines from where the mold parts joined. I wouldn’t believe those pieces were made from a mold if I didn’t see for myself. The dexterity of those artisans is formidable! Then came the booth where the glazing compound is applied to the pieces using an airbrush-like tool. At first I thought it was like painting and seemed as an easily achieved task, but then I was told the mixture is actually a dry powder... it suddenly appeared as a very complicated and difficult operation! The First Floor tour ended at the enormous kiln where the pieces are fired.

At the Second Floor, other artisans apply decorations to the pieces, be it by the mesmerizing hand-painting techniques, or the minute application of printed decal sheets. This includes the amazing pinstriping of the pieces by hand and the complex application of flat decals to curved surfaces, which looked ridiculously difficult, and yet those craftspeople achieved with no sweat! Also very interesting was how the gold details were achieved with the liquid “Bright Gold” paint, that look as a dirty dark brown before firing, but come out of the kiln looking like pure gold! 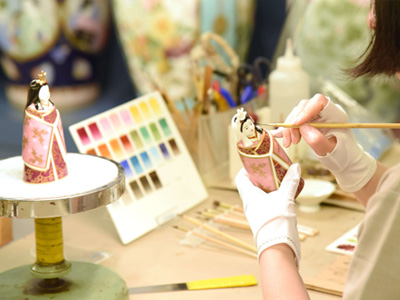 The Third and Fourth Floors of the Crafts Center are home to the Noritake Museum, an astounding gathering of historic Noritake pieces both old and new. We were introduced first to the Fourth Floor, where the exhibits and displays depicting all the hardships and challenges faced by the founders, as well as their achievements and legacies, makes the visitor finally realize how renowned and acclaimed this brand has become across the globe, and the majestic scale of the business they started: the essence of founder Morimura Ichizaemon’s “Project X”.

Morimura Ichizaemon (1839-1919), son of a merchant who dealt with the “daimyo” lords, was largely unsatisfied with the exports trade monopoly exercised by the foreign companies in the late Edo period days. He moved to Yokohama as soon as the ports opened, so as to participate closely at that soaring market. Dealing with the government helped him to amass a fortune, but he gave up that line of business after an official demanded bribes from him. Still in unrest, and feeling the need for a Japanese-owned channel for trading, he partnered with his brother to form the “Morimura-Gumi” trading company, sending him to the USA to manage the Morimura Trading shop in New York City. They dealt with many items but, ultimately, ceramics became the main trade products. 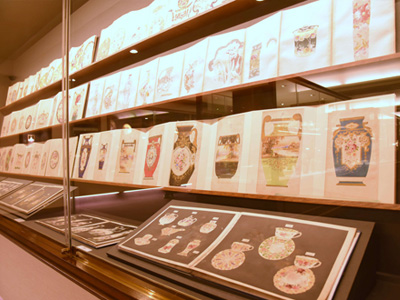 The ceramics made in Japan at that time were not especially refined. Morimura Ichizaemon, with his never-resting entrepreneur spirit, decided to resolve this problem at its core by founding the Nippon Toki company, which primary mission was to supply the American market: a steadfast growing market with plenty of wealthy and demanding customers. He also realized that manufacturing products exactly in the fashion wanted by the customers was key. Unfazed by the poor communication tools of that time, he dispatched Japanese design specialists to live in a quasi-permanent basis in New York, so they could directly absorb all the requests from the clients.

Those designers would then talk to the patrons, draw the orders on paper and send those richly detailed designs to Japan. And the Noritake Museum has several albums of those drawings on display, a veritable testament to the perseverance and dedication of those artists. Intricate masterpieces by themselves, with impressive fidelity of details, colors, texture and form. And what’s more staggering: despite having paper as medium, those designers knew exactly all the possibilities of the porcelain painting techniques: how the colors would turn out once fired, the depth or height of the reliefs, the luster, the texture. Mind that the fastest communication tool of that era was mail, which often took months to reach Japan. They just had to know everything about ceramics and paper painting, no chance for second-guessing. That skill by itself is very, very impressive. 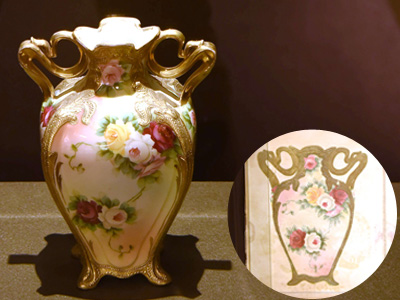 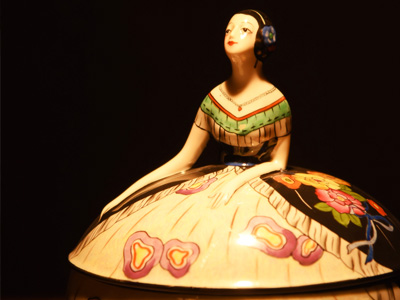 The Third Floor had another plethora of porcelain items on display, but those are more recent and closely depict the ever-changing trends in modern tableware. The variation of colors, forms and designs is astounding. But there’s something here that you may not be able to see anywhere else: how the Noritake china made for other countries are different from the products made for Japan. Subtle differences in form and function that are really enlightening and tell another whole lot about this company’s drive for satisfying the needs of its clientele.

Lose yourself into painting your own prime work!

Well then, after the exciting tour of all those wonderful things, it’s time to get our own hands to work at painting some porcelain pieces at the experience corner. They have a number of pre-glazed blank pieces like mug cups and small dessert dishes. You choose your item and sit at the benches equipped with brushes and overglaze-specific paint, as well as the accessory items such as water bows to rinse the brushes and paper towels. A very patient staff member will instruct you on the basics of porcelain decoration and the areas you cannot paint due to the firing afterwards and etc.

You can paint directly on the pieces doing your own creation from scratch, but they also have available blanks with already-applied sketches, which you just have to paint in order to finish them, and sample illustration books for reference in case inspiration is scarce. I chose a dish on which I did the design sketch with a ball pen prior to applying the paint. I was told that, upon firing the piece, the pen sketch paint just evaporates completely leaving no trace of it. 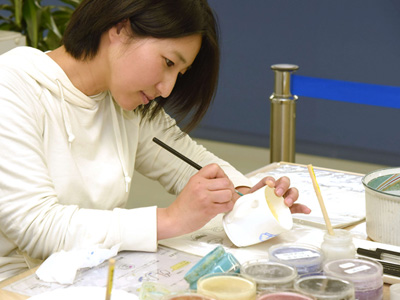 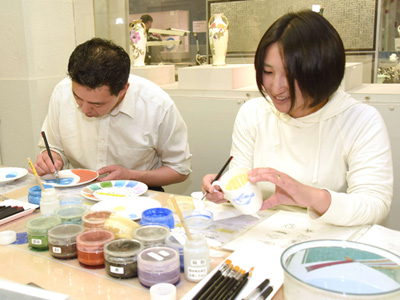 The actual painting part was unexpectedly difficult! First, the pigment colors looked very different from what they ultimately become after firing, so you have to rely on a color reference piece, thoughtfully provided. And second, I wanted solid, deeply colored large areas, but as the paints are water-based, they will drop or run and accumulate at the lower areas and smears very easily. You can add a thickening agent, but even then it was quite hard to achieve uniform dense areas. At some point I just gave up and went for a more “artistic” and textured appearance (kind of an excuse for the mess I ended up with... haha!). Maybe the pigments are more adequate to soft, light coloring...

Anyway, this activity requires quite a lot of concentration, and you just gradually loose notion of the time. One hour passed in a brisk! After you finish your creation, the staff will collect it in order to fire and send it to your address, but only after a week or two, as sometimes it takes days just for the cooling phase! Although my painting wasn’t quite as I had envisioned it, I was very satisfied with the final dish and the vivid colors obtained. Going through this experience greatly augmented the respect I already had for those hand-painted pieces. It was quite enlightening and I recommend to everyone who's the least interested in bone china. 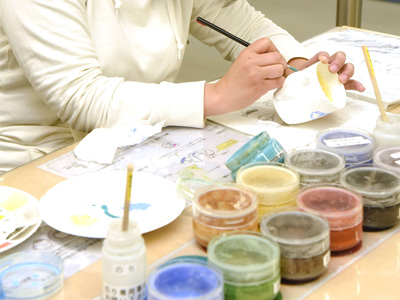