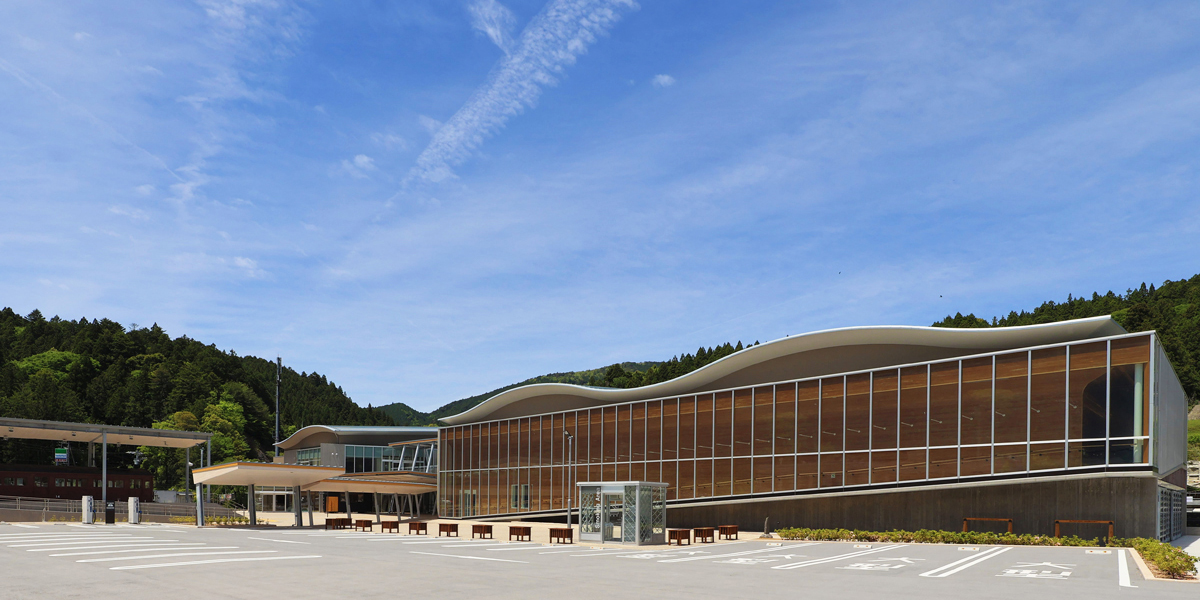 Shitara-Town is said to be composed of 90 percent mountains and forests. It is also the source of three rivers: Toyo River, Yahagi River, and Tenryu River. Shitara’s food is the epitome of nature’s blessings, grown in abundant forests and fresh air, with significant temperature differences between day and night. Within Roadside Station “Michi-no-Eki” Shitara, there is also a market managed by a company called Tsuguya that provides a wide variety of local ingredients, fulfilling the company's wish to someday make this roadside station a place for selling local vegetables. 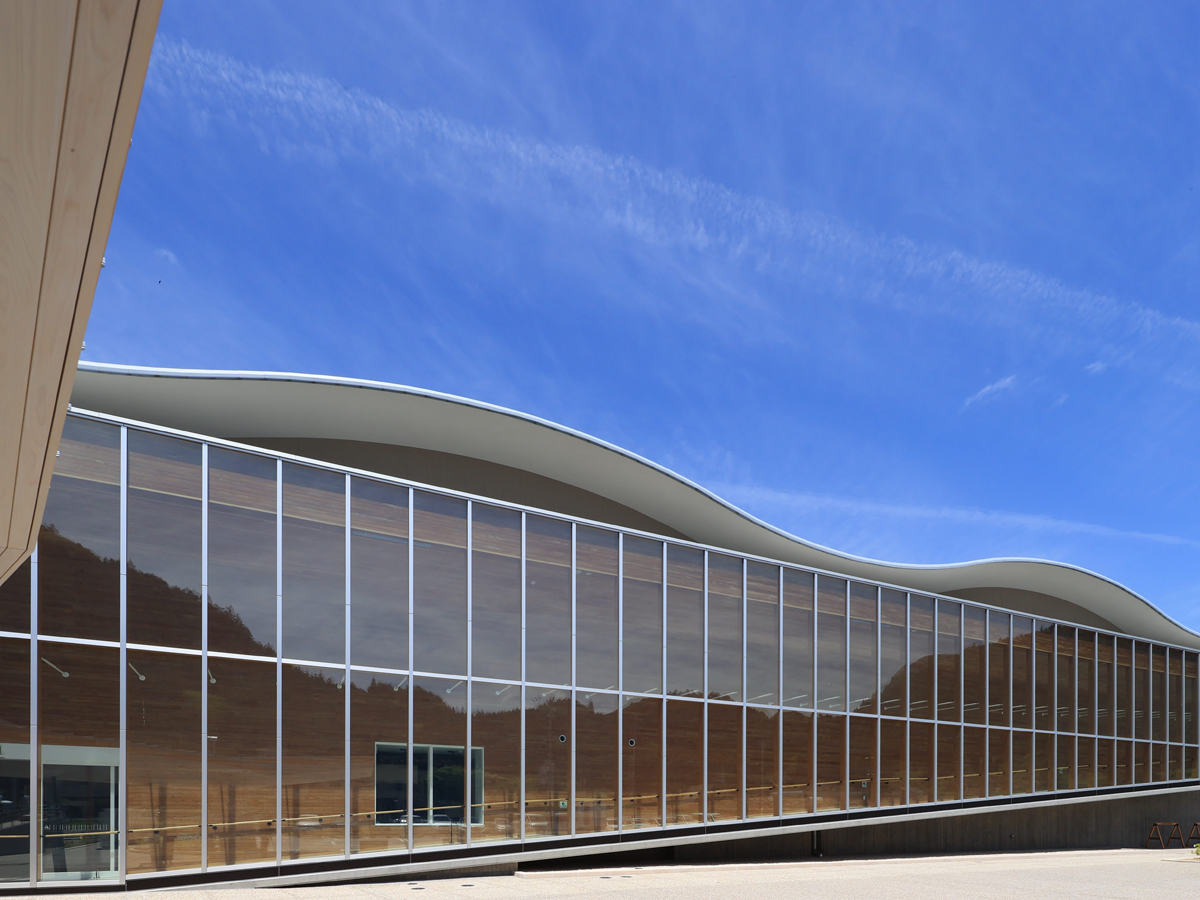 The first thing to take note of is the rice grown in Shitara-Town.
Shitara-Town is famous for its delicious rice! This rice is also highly popular with the locals.

At Roadside Station “Michi-no-Eki” Shitara, rice is sold at the market on the first floor. For those who looking to try it out or give some as a souvenir, getting the easy-to-carry ｍini size is recommend. 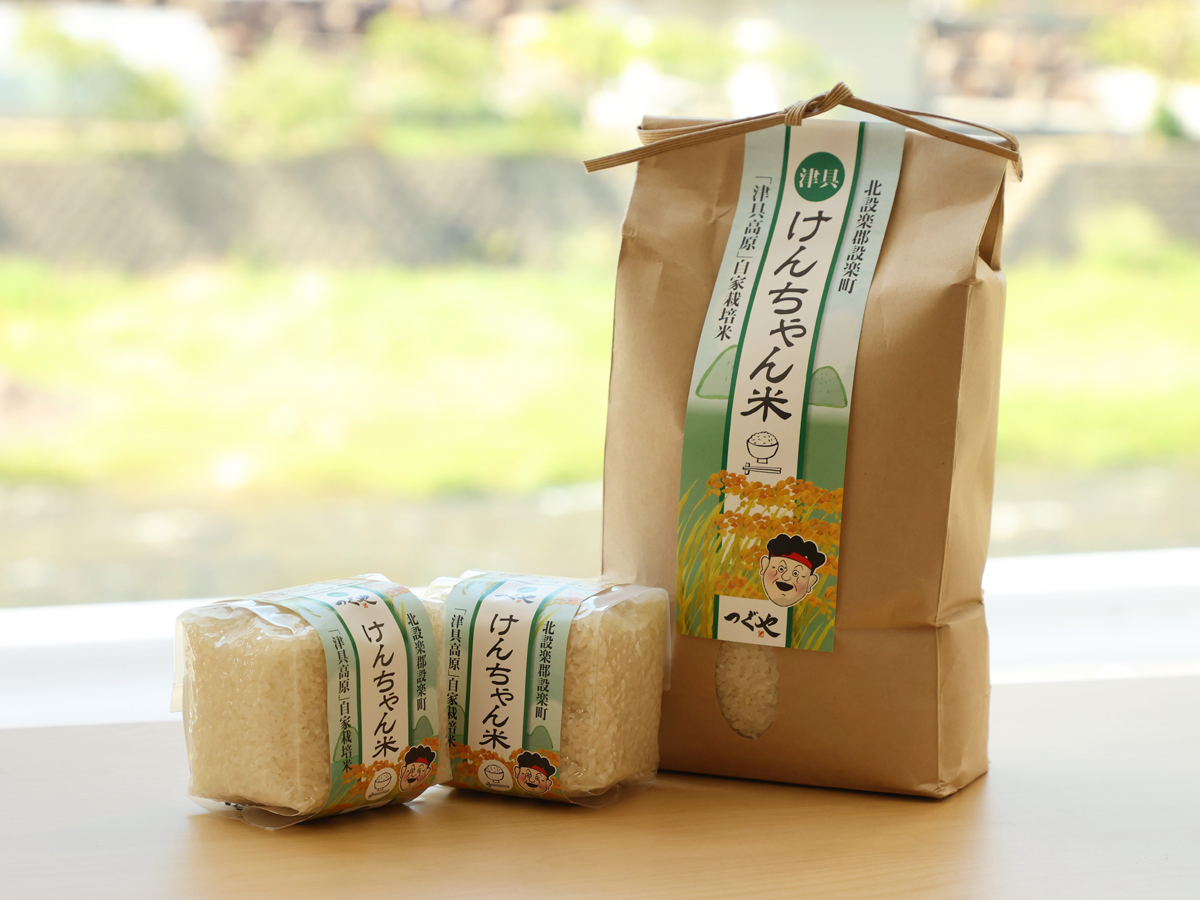 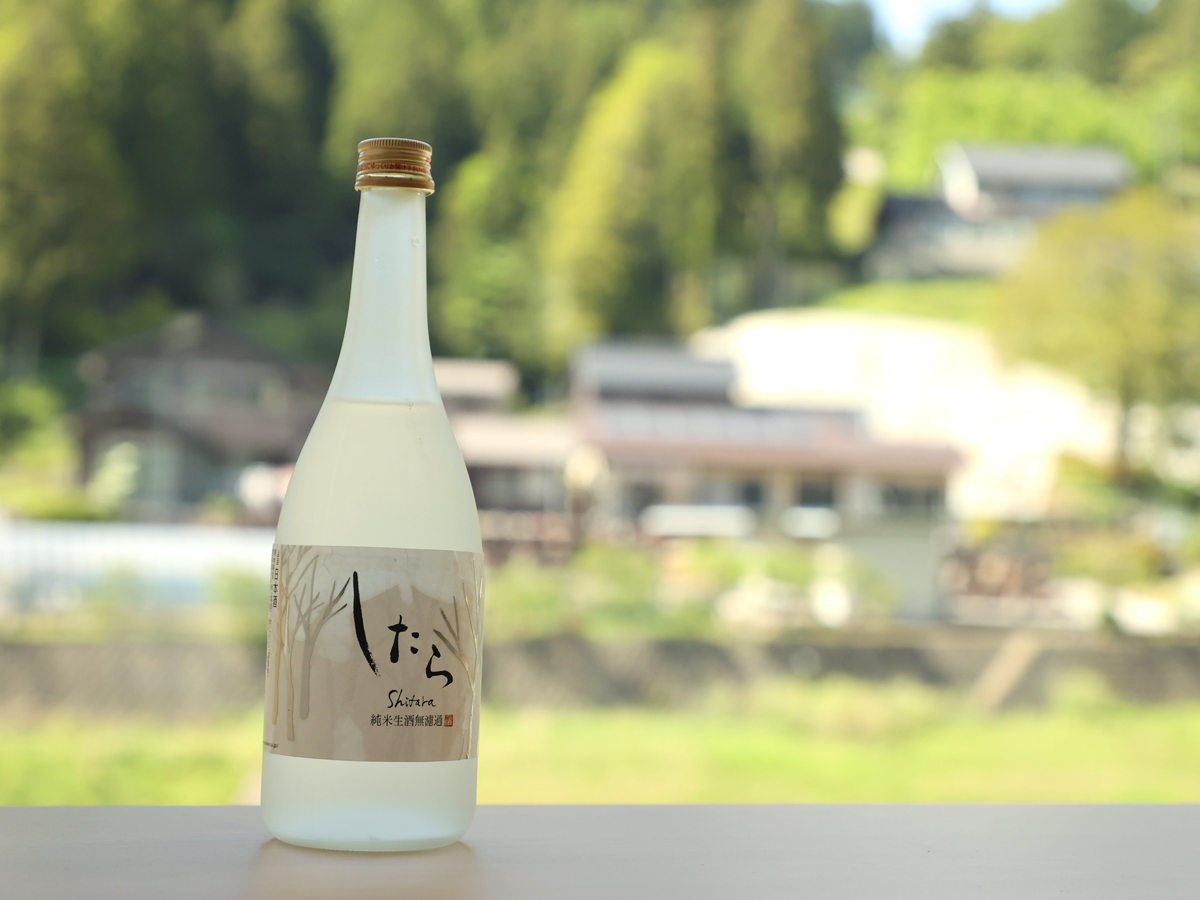 On the second floor of the Roadside Station is the Houraisen Sake Laboratory where you can experience making sake. Japanese sake brewing is practiced on a small scale by reservation only at this experiential facility where sake training, amazake (sweet fermented rice drink) classes, workshops, and so on are held. You can receive the sake you made after the brewing process is complete.
The space looks like an old science lab, and as soon as you enter you’ll feel a growing sense of excitement.
Challenge yourself to make your very own sake here someday.

*: Reservations can be made from Sekiya Brewery’s Event Reservations Page (Japanese)
https://www.houraisen.co.jp/reserve/event/list/5

Gohei-mochi is known as a famous product of the Okumikawa area. It’s said that the shape originated from the Shinto “gohei,” wooden sticks decorated with paper streamers. At first glance you may be surprised by the size and shape, but soon you won’t be able to get enough of the aromatic combination of sweet, grilled miso paste and rice.

You’ll definitely want to try recreating this flavor at home, too. At the market on the first floor you can buy a recommended gohei-mochi set for eating at home or at a BBQ.

Yamaga Konnyaku is another popular Shitara-Town specialty made from the konjac potato plant and prepared using traditional methods. Thinly cut, their konnyaku is fresh enough to enjoy as is, with a taste reminiscent of sashimi, or raw fish. You’ll likely be surprised at how different the konnyaku tastes compared to what you’ve eaten until now.
Of course, an assortment of fresh vegetables grown by local farmers is also available. 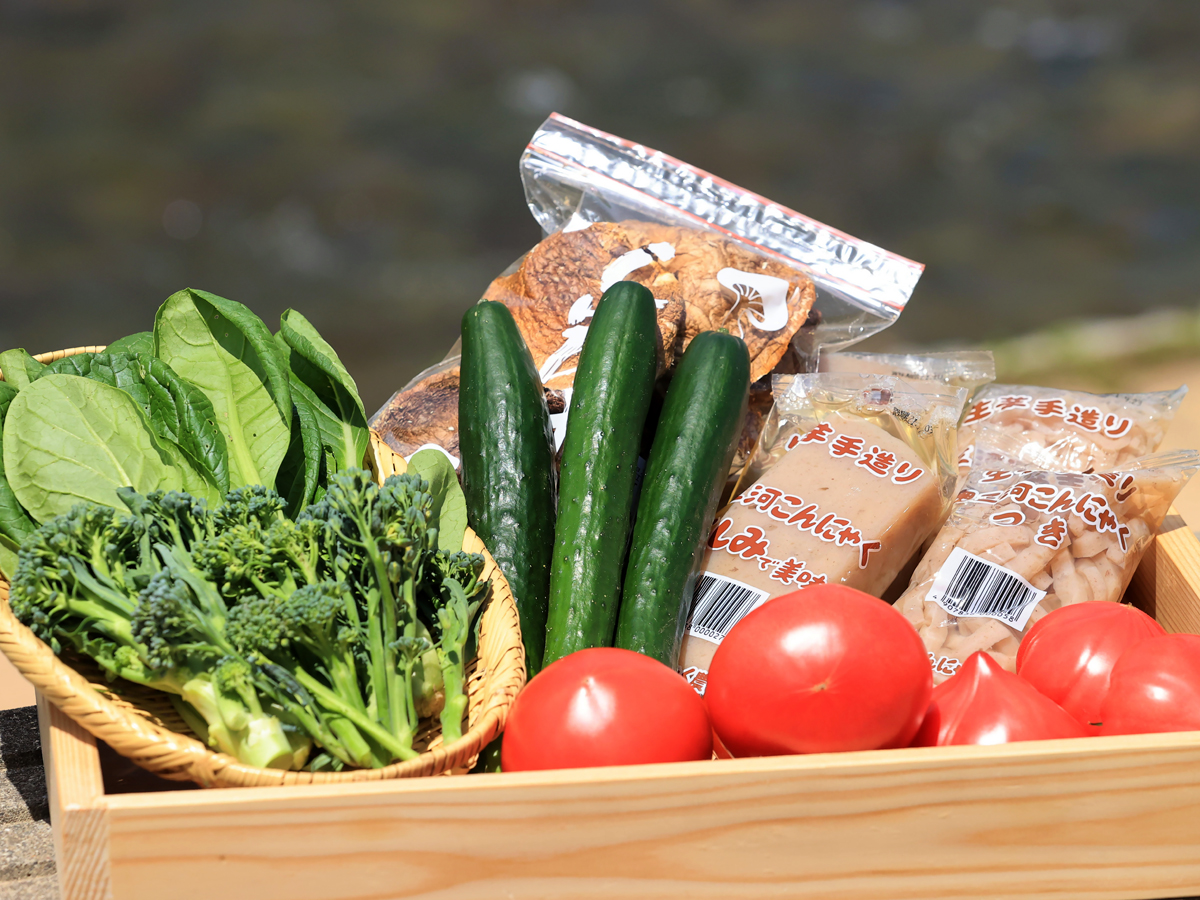 Meat or fish raised in Shitara’s hills or rivers also deserve attention.
Wild game and freshwater kinuhime salmon are famous local specialties that can only be tasted here.

At the restaurant, you can order Mori-no-Megumi Mazesoba (1,100 yen) featuring Shitara deer meat or try deep-fried kinuhime salmon and sashimi at the same time with the Kinuhime Salmon Set Meal (1,200 yen). Those who want to taste wild game or the regional brand of fish are encouraged to experience it here.

Have fun searching for other products that are packed with Shitara’s charms!

Constructed with a traditional roof frame, the exhibition room is made of solid Japanese cypress. As you step inside, the soothing scent of cypress surrounds you.

If you walk past the exhibits in order from the entrance, you’ll gain a deeper understanding of the connections between nature and people.

Above the River, Below the River: Examining Shitara’s Geology from Top to Bottom

▼The mountain hawk-eagle is a symbol of Shitara-Town. Imagine the silhouette of this bird flying freely through the air, and you’ll feel the magnificence of Shitara-Town. 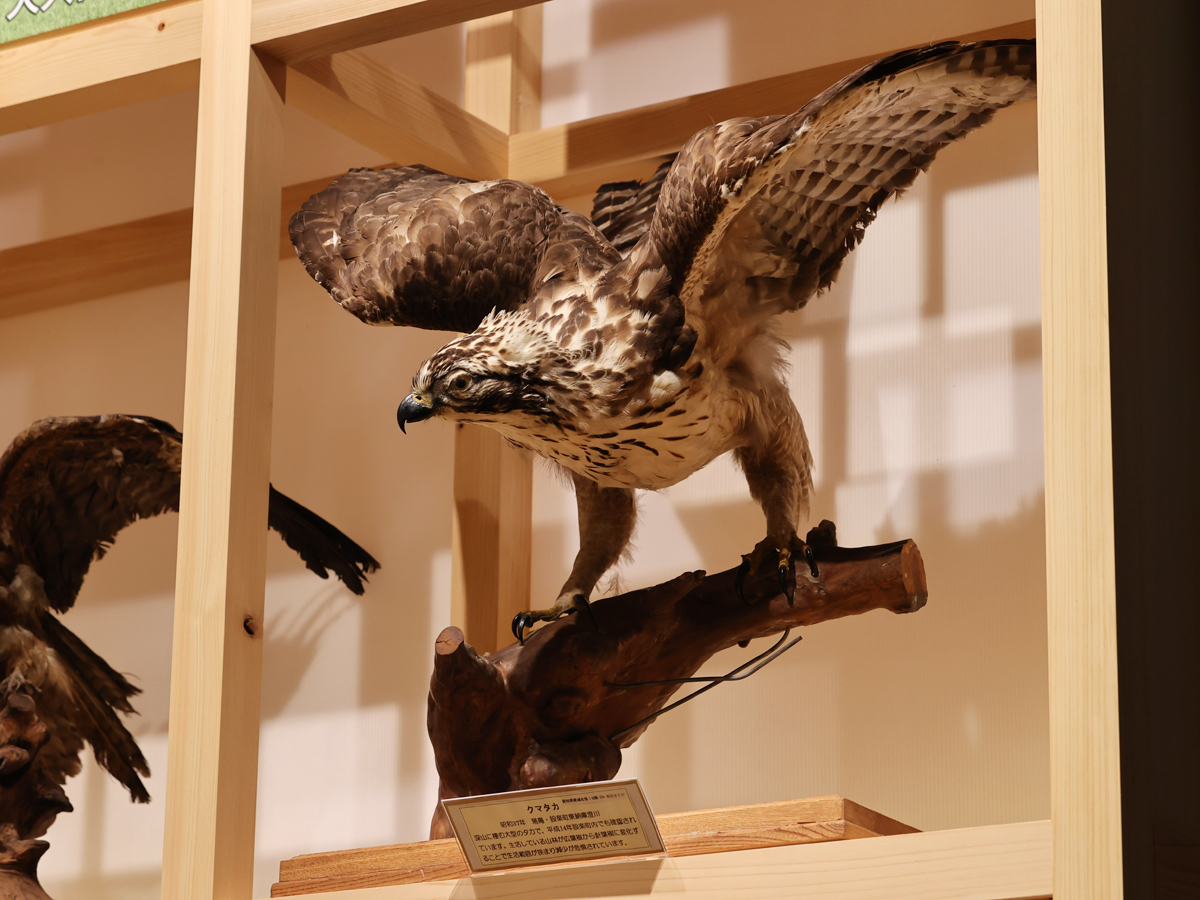 And Then to the Earth’s Surface
▼Discover a heart in the trace fossil of a shipworm! 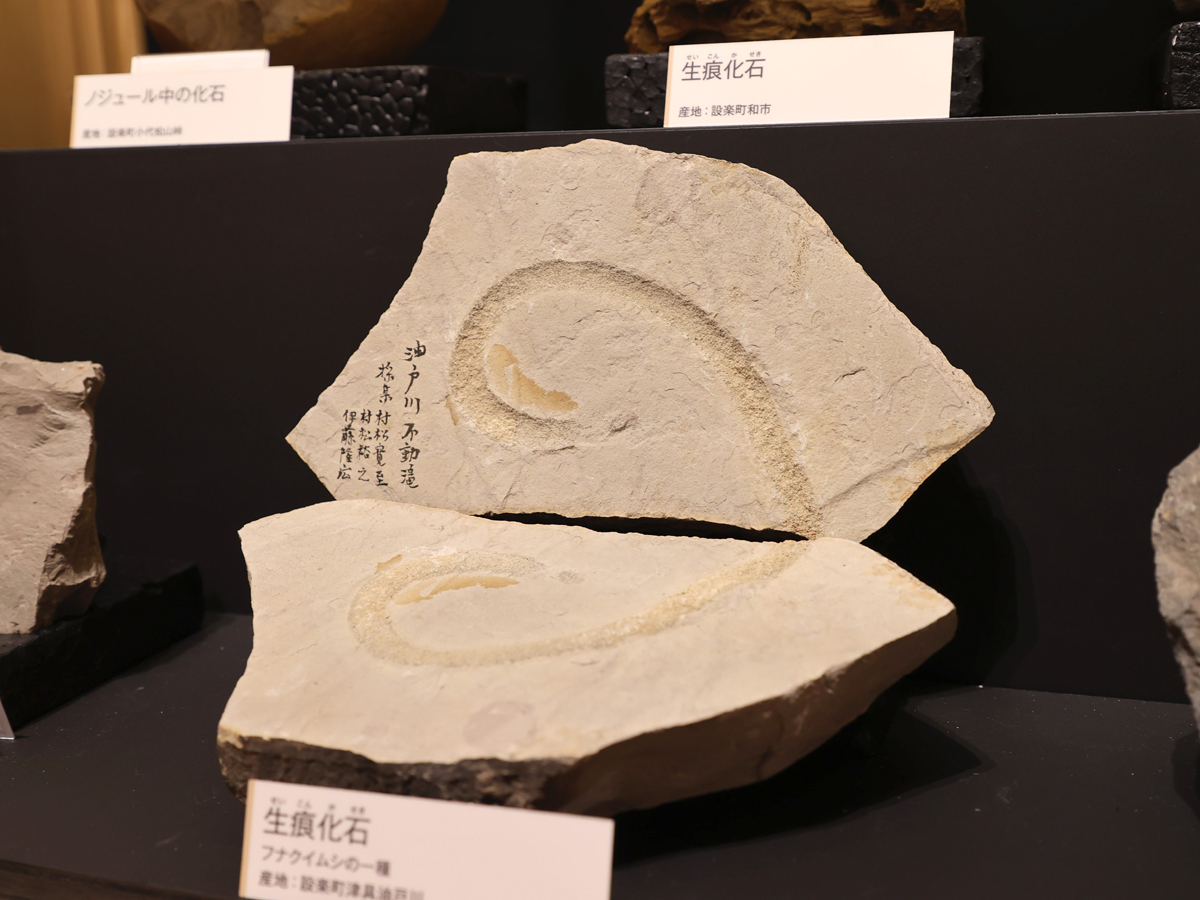 ▼Pyroxmangite, inspiring a love of rocks. 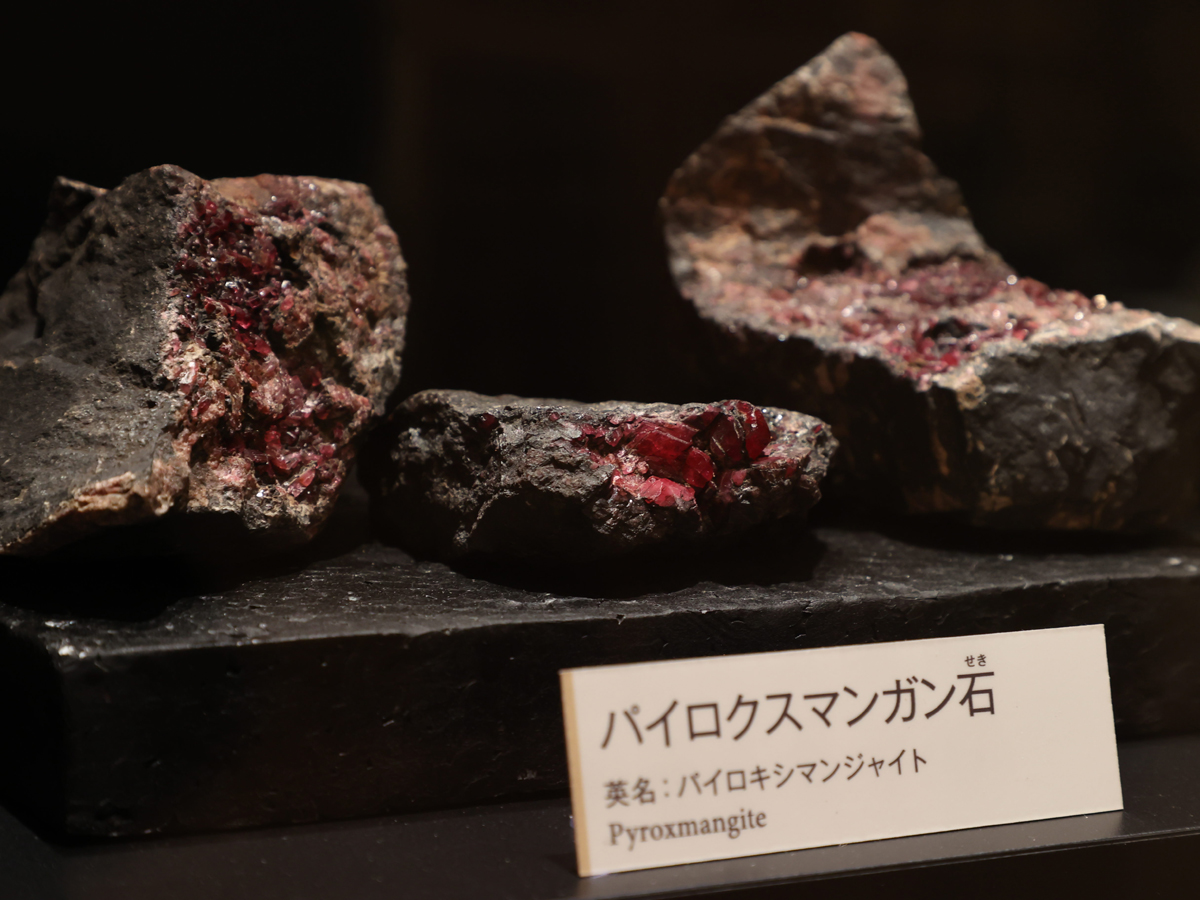 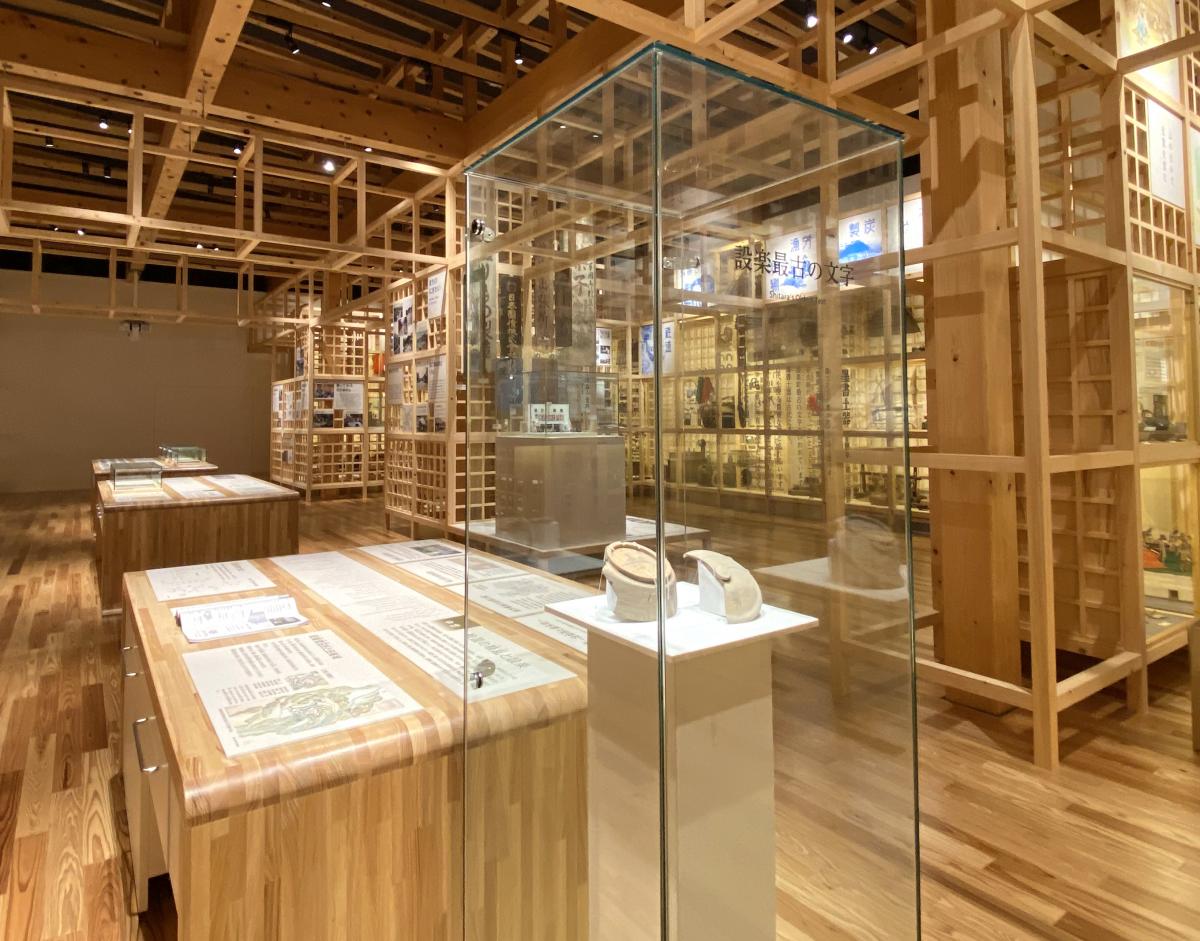 The Lives of Humankind and the Development of a Nation

▼Agricultural equipment and traditional events from a long time ago are on display, as well as an exhibit of an old Japanese-style house on the first floor.

▼A notable feature of the building’s exterior, the slope has an impressive architectural beauty created out of an abundance of Japanese cypress grown in Shitara-Town. The outer wall of plain cedar boards is said to have been built with particular care and consideration. 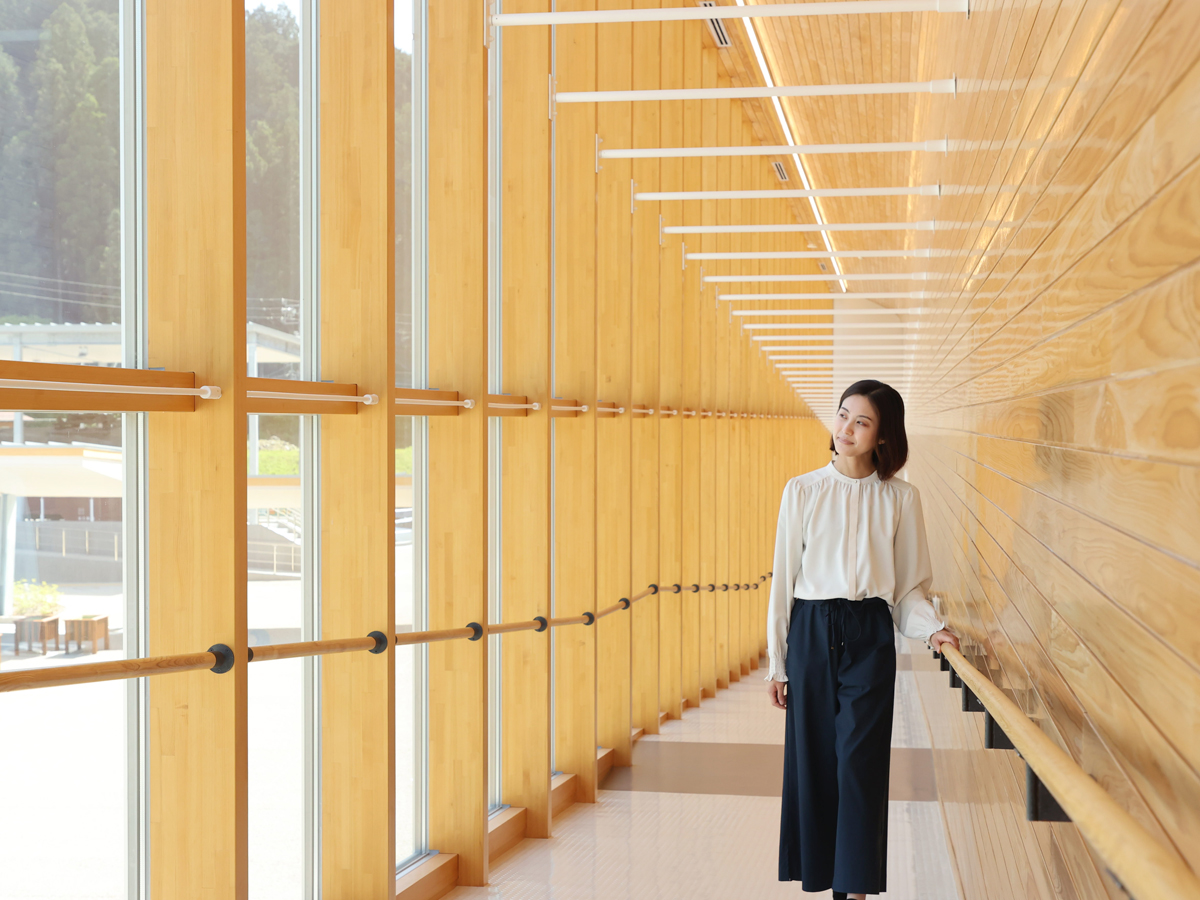 The Taguchi Line, a railroad which used to run in Aichi Prefecture’s Okumikawa area, was discontinued 50 years ago. Local residents and sightseers alike miss the sight of the beloved Taguchi Line to this day and continue to hold events such as tours of the discontinued route.

With plenty of worthwhile sights, including the Okumikawa Museum of Local History and adjoining sake experience facilities, the new Roadside Station “Michi-no-Eki” Shitara offers various ways to have fun. Be sure to stop by when sightseeing in Okumikawa.

Yagumoen Fishing Weir (Yagumoen Kiyosakiten)
One of the famous items here is the large, sandal-sized gohei-mochi made from pounded rice covered in miso or soy sauce and grilled. In the summer, enjoy BBQ or sweetfish catching in addition to the tempting scents of the freshly grilled sweetfish cuisine. In winter, Yagumoen offers dishes made with wild game caught by a local hunter. 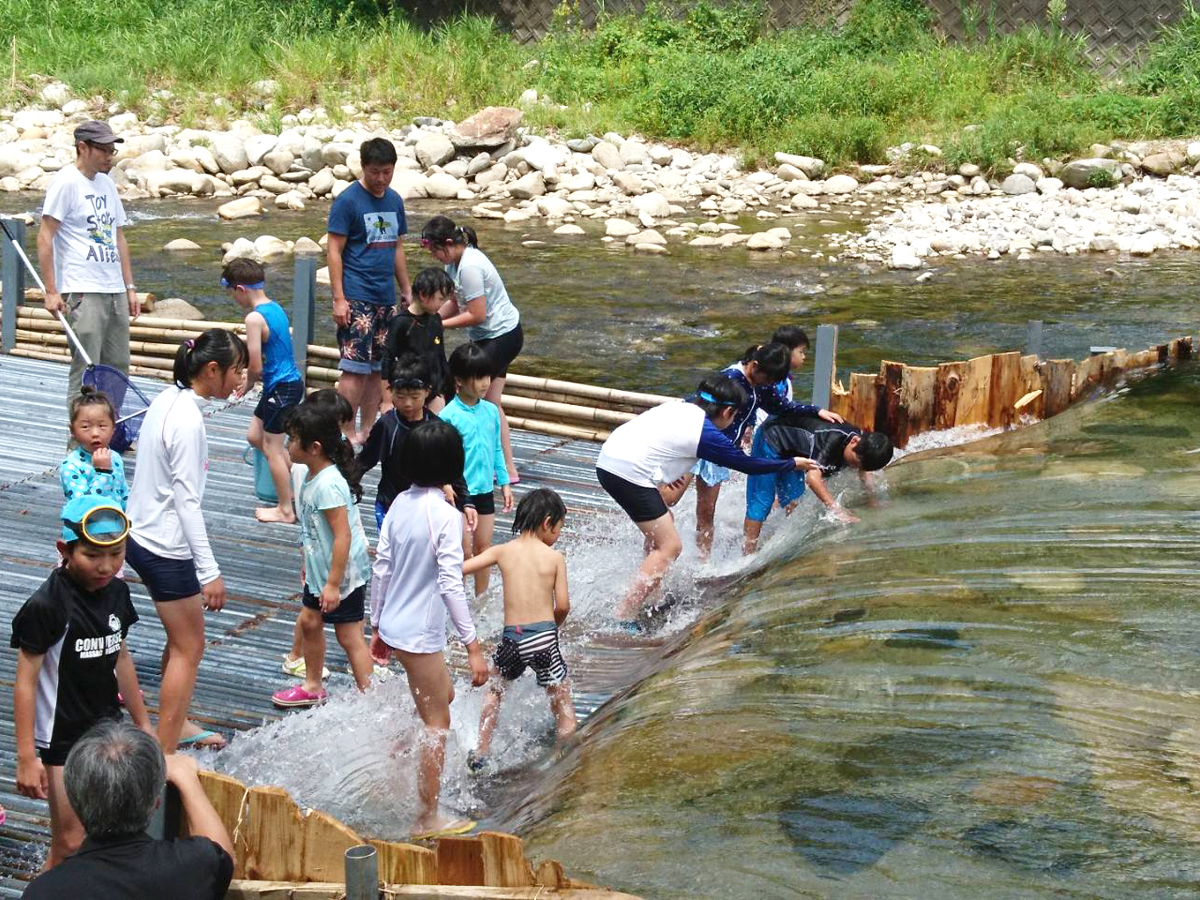 Damine Castle
Damine Castle was built circa 1470 on a hill overlooking the village of Damine in north-eastern Aichi Prefecture. Although the castle was abandoned during the Edo Period, the castle ruins remained in relatively untouched condition, allowing for research and for the reconstruction of a number of features, including the Goten palace, the watchtower, gates and fencing to create a fine reconstruction of a Sengoku Period castle. 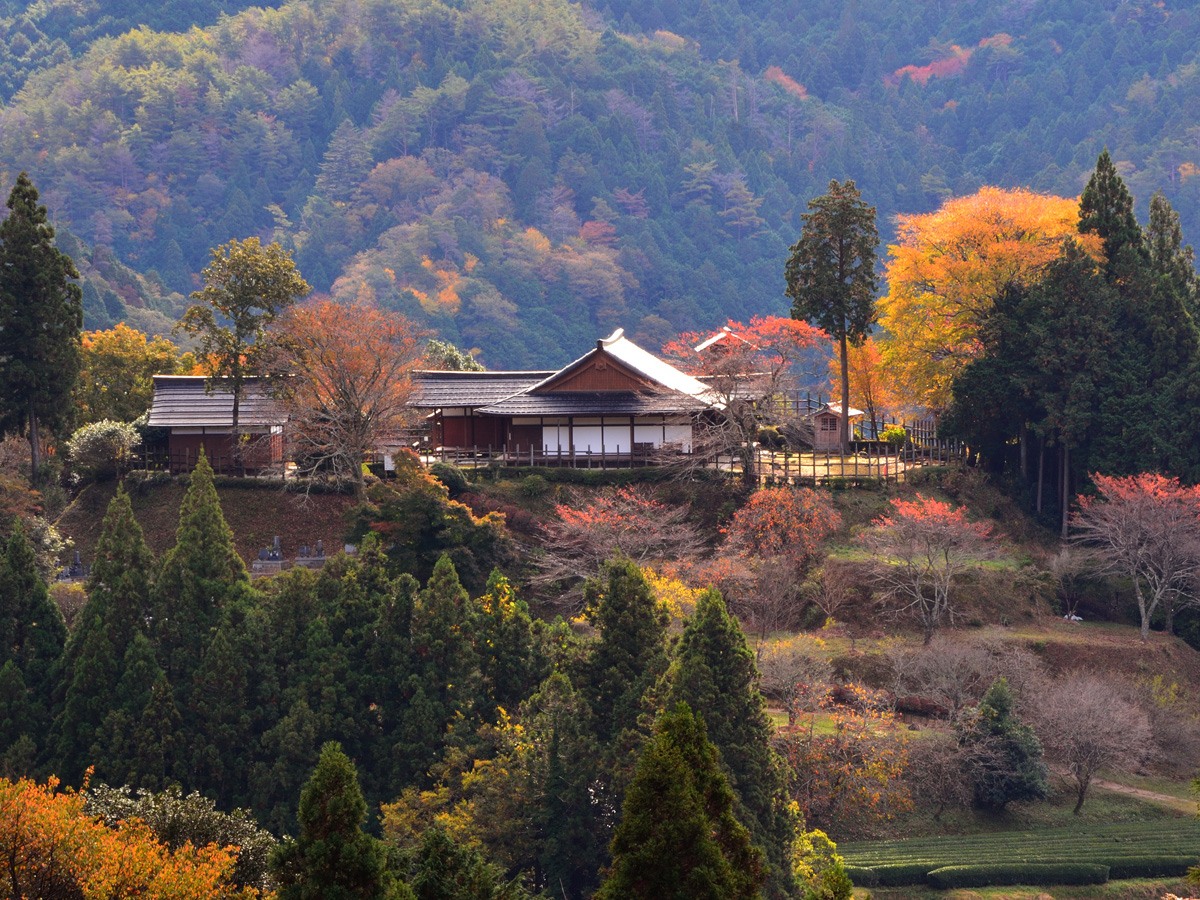 Thousand Rice Paddies of Yotsuya (Yotsuya Senmaida)
On the outskirts of Shinshiro City and at the foot of 883m high Mt. Kurakake in eastern Aichi Prefecture, are the terraced rice growing fields of Yotsuya Senmaida. Translated, senmaida means "1,000 rice paddies," an approximation of the actual number of terraces. The terraced landscapes are enjoyable all year round, with the views changing with the seasons. 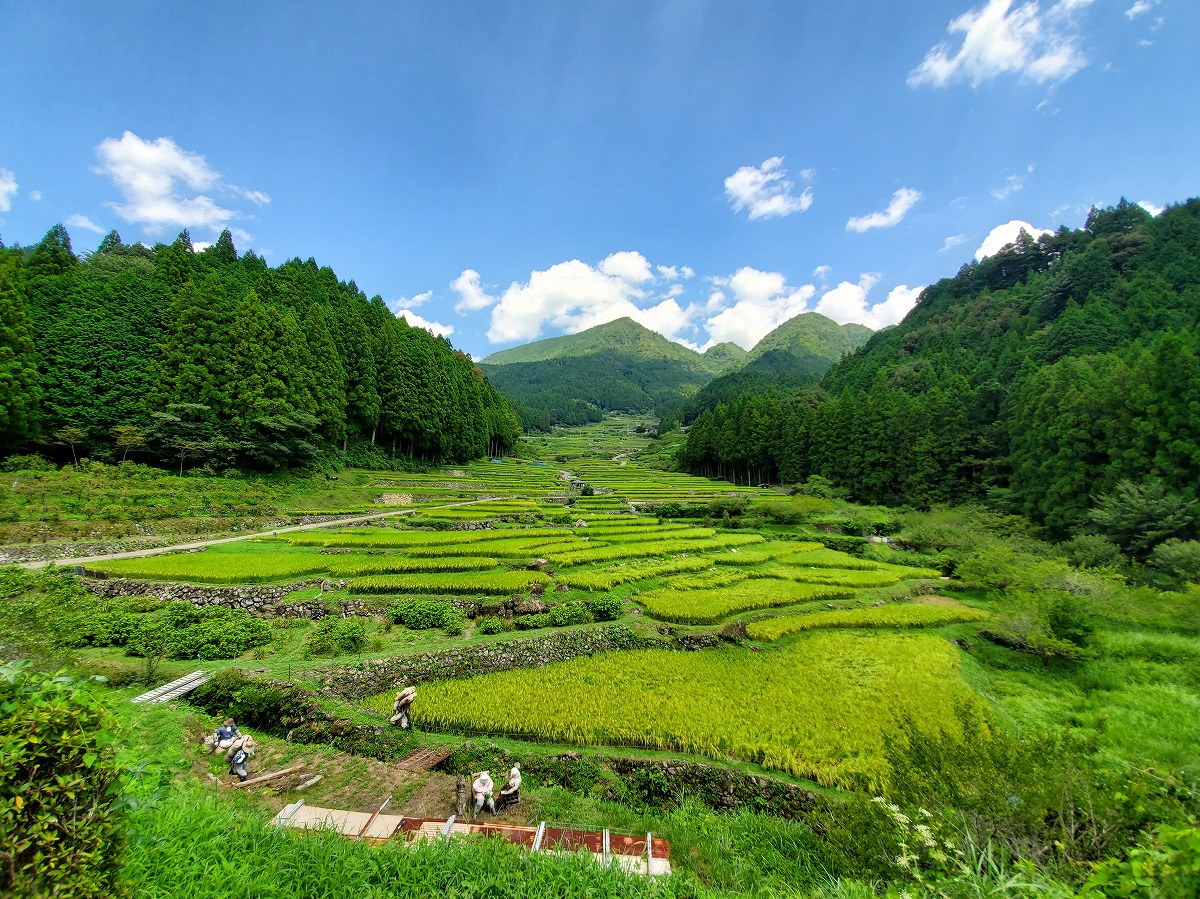