Of the Six Ancient Kilns Designated as Japan Heritage,
Two Are in Aichi Prefecture!

Seto, Tokoname, Echizen, Shigaraki, Tanba, and Bizen are referred to as the Six Ancient Kilns of Japan. Originated and developed in Japan, these pottery centers use traditional Japanese techniques that have continued to make contributions to the world of pottery since the prehistoric Jomon period.

The Six Ancient Kilns were recognized as Japan Heritage sites in 2017! 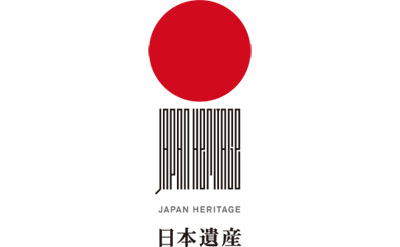 What is Japan Heritage?

The Agency of Cultural Affairs selects Japan Heritage sites for narratives that convey Japan’s culture and traditions through the region’s unique historical characteristics. In addition to recognizing the importance of cultural properties, the focus of Japan Heritage is to recognize the legacies that connect these properties.

What Are the Six Ancient Kilns? What Kind of Places Are They?

Termed the Six Ancient Kilns by historic ceramics scholar Fujio Koyama in 1948, these six kilns (in Seto-City, Tokoname-City, Echizen-Town in Fukui Prefecture, Koka-City in Shiga Prefecture, Bizen-City in Okayama Prefecture, and Tanbasasayama-City in Hyogo Prefecture) are representative of the Kamakura and Muromachi periods.
All are well-known pottery towns, continuing uninterrupted from medieval times. Even now the nostalgic townscapes can be said to conjure up scenes of ancient Japan and a trip to these peaceful towns seems to transcend time and space.

A Quick Overview of Aichi’s Seto and Tokoname Wares!

■Seto ware, famous for beautiful, exquisite porcelain
In Japanese, the word “setomono” is used as a general term for pottery, an indication that Seto ware has been famous since long ago.
In medieval Japan, the technique of applying glaze in order to increase the strength of the work was only used in Seto, and primarily purchased in the capital or by prominent temples. In the Meiji era, Seto ware was exhibited at world fairs to high acclaim, and orders from abroad increased as the name Seto became known throughout the world. 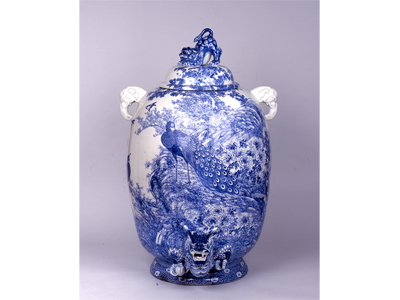 ■Tokoname ware, popular for small teapots perfect for drinking tea
Even among the Six Ancient Kilns, Tokoname had the largest production area and widely distributed large-scale pots, jugs, and earthenware bottles. One of the features of Tokoname ware is the inclusion of iron in the raw materials to produce a reddish color. It is said that the iron oxide often contained in Tokoname ware teapots reacts to the tea’s tannin, absorbing bitter or astringent flavors and producing a mellow tea. 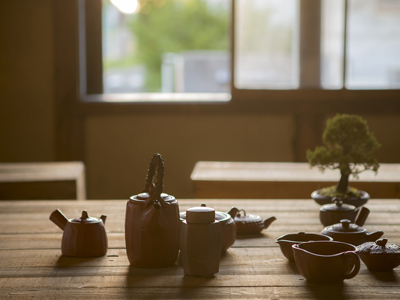 Incidentally, Each Place Has Different "Manekineko"!

Tokoname produces the most manekineko, or traditional lucky cat figurines, in all of Japan. It is said that the Tokoname style is characterized by a plump body that is two heads tall, large eyes that curve downwards, and an oval gold coin called a koban.
As for Seto’s manekineko? They can be distinguished by their slender body with proportions similar to a real cat. Featuring a porcelain typical of Seto ceramic ware and a smooth porcelain surface, these manekineko are both classic and stylish. Each type is wonderful in its own way!

[Photos Below] Left: Tokonomae Manekineko Right: Seto Manekineko
*: Since each city has many different types of manekineko, these are representative examples.

For Those Who Want to Enjoy a Leisurely Trip:
Seto Spots to See, Shop at, and Experience

Seto-Gura Museum
First and foremost a comprehensive museum of Seto ware, the Seto-Gura Museum also has a pottery shop, a restaurant, and more. Based on the theme “Seto in the 20th Century,” the museum features reproductions of stone kilns, pottery workshops, and so on. 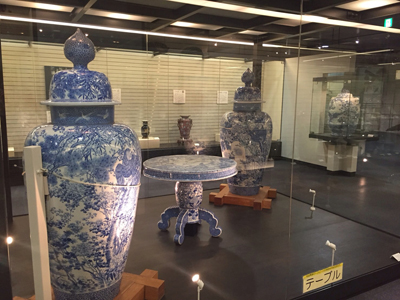 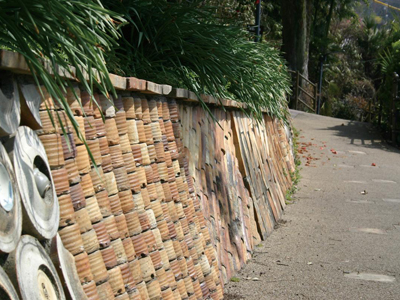 Kamagaki no Komichi
This kind of stone wall inlaid with kiln tools is known as Kamagaki in Japanese. Seto is the only place in Japan where you can see this kind of scenery. The stone wall continues for approximately 400 meters along the narrow, winding path called Kamagaki no Komichi which used to be the main street for transporting pottery in the olden days. In the surrounding area are many pottery studios and galleries where you can further enjoy the atmosphere of this pottery town.

Seto Ceramics and Glass Art Center
This facility centers around the future of ceramics and glasswork. Inside you can see exhibitions of artworks by enthusiastic artists, observe students at work, enjoy drinking from handmade vessels in the community room, or purchase original works from the gallery. 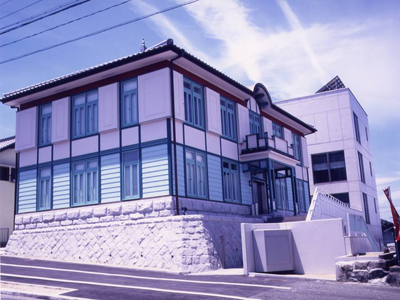 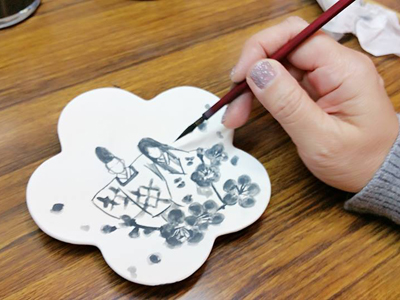 Seto Blue and White Ceramics Center
A traditional type of Seto ceramics, "Seto blue and white ceramics" is the theme of this facility. The center has displays of historical masterpieces, a place where you can observe students at work, a hands-on ceramics painting corner, and a corner selling works by current and former students. Old kilns, designated by the city as cultural properties, are also preserved here.

Aichi Prefectural Ceramic Museum
This art museum exhibits a comprehensive collection of pottery from the Jomon period to the modern day. Within the grounds are a restaurant, a tea house where you can enjoy matcha green tea served in bowls made by artists, and a Ceramic Craft Studio where you can experience making pottery and bisque-painting at economical prices. 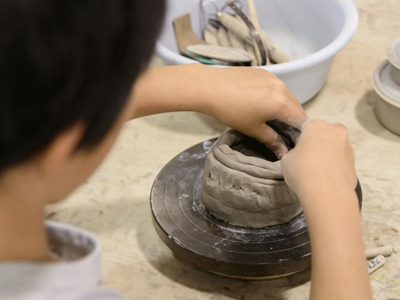 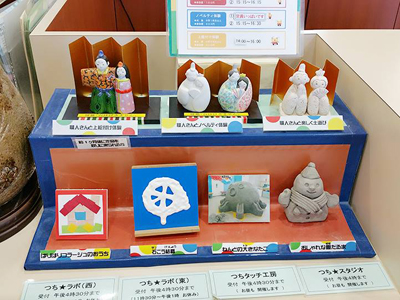 Novelty Children’s Creation Building (Novelty Kodomo Sozokan)
Observe and experience the art and culture of Seto novelties (a general term for ceramic ornaments) at this facility. You can also make your own work using clay or various other materials.

Manekineko Museum
The largest in Japan, the Manekineko Museum continuously displays over 1,000 beckoning cats.
Categorized into historical artifacts or religious objects and differentiated by major production centers, the exhibit on the second floor conveys an impressive overview of these Japanese cultural objects.
There’s also a manekineko painting experience where you can decorate your very own lucky cat.

For Those Who Want to Enjoy a Pottery-Filled Stroll:
Take in Tokoname With a Round-Trip Course

Experience a unique and historic atmosphere with brick chimneys, kilns, and hilly slopes made with scraps of pottery. 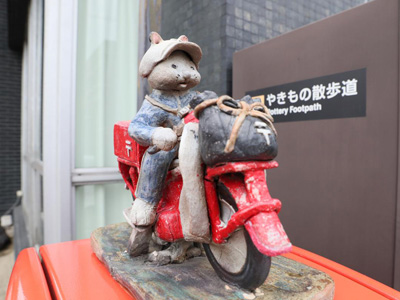 Ceramic Hall
The starting point of the Pottery Footpath, the Ceramic Hall displays and sells Tokoname ware. There’s also a cute manekineko riding a red motorcycle on top of the post office box in front of the Ceramic Hall. 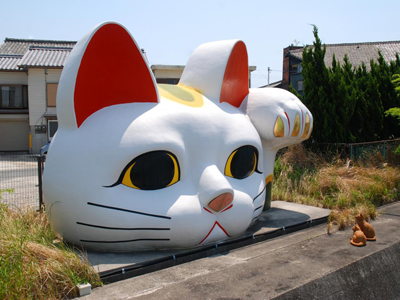 Tokonyan & Tokoname Manekineko (Fortune Cat) Street
A gigantic manekineko monument (6.3 meters wide, 3.8 meters high) that appears to keep watch from high overhead, Tokonyan is impressively huge! A fun street for a stroll, the road leading up to Tokonyan has a concrete wall lined with as many as 50 unique manekineko statues. 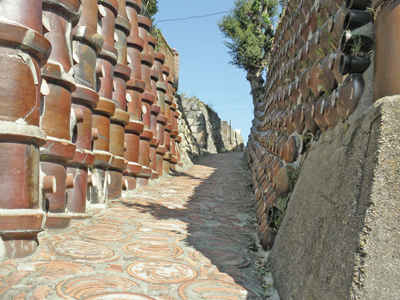 Dokanzaka (Clay Pipe Hill)
One of Tokoname’s most recognizable photogenic scenes can be found here. About 10 meters south from the Takita Family Residence is the Dokanzaka, or Clay Pipe Hill. Covered with clay pipes from the Meiji period and shochu jars from the early Showa period, the place has a charming air.
There’s also a nice rest area with a view at the top of the slope on the left-hand side. 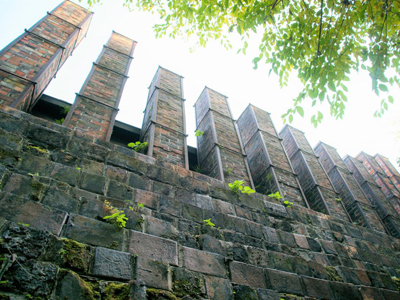 Nobori-Gama (Climbing Kiln)
This climbing kiln is said to be one of the largest remaining in Japan. In 1982, it was designated as an Important Tangible Cultural Property. You can also take a look inside the kiln.

This course goes around to places such as INAX MUSEUMS and Tokoname Tounomori. Take your time and stop in at stylish cafés or galleries along the way. 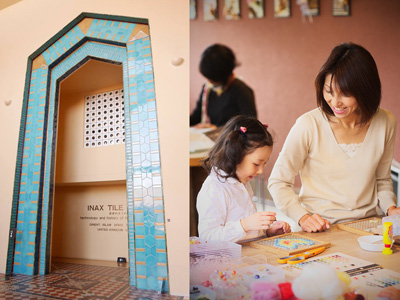 Tokoname Tounomori
Tokoname Tounomori is composed of a museum, a ceramics lab, and a training studio. Surrounding the facilities is a lush green forest, where you can go on therapeutic walks in the woods and search for ceramic statues scattered among the trees. 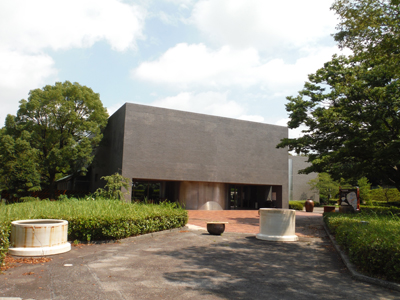