ETIQUETTE WHEN VISITING
TEMPLES AND SHRINES

As religious centers for the Japanese people, temples and shrines exist everywhere in the country, and while in Aichi you are most likely to see a great number of them - many among them are rich in history and important in the communities they serve. We listed below some of the basic ritualistic behaviors when visiting them. Just be aware that some places may have a slightly different set of procedures.

If you are not Buddhist an find yourself concerned that visiting a temple or shrine may offend your religion, remember that bowing, joining hands and etc. are just forms of paying respect. It does not mean you “believe” in Buddha or Japanese “Kami” gods. Enjoying the rich history, the interesting local customs and the gorgeous architecture does not require a faith. Have fun!

Common notes about temples and shrines

Common notes about entering the temple or shrine

Purifying mind and body at temples or shrines 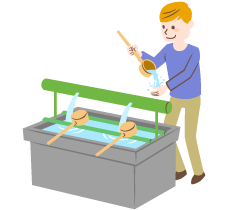 1. Do the reverence at the entrance and avoid the center line

As mentioned above on “Common notes about entering the temple or shrine”.

2. Do the purifying ritual by cleansing up

As mentioned above on “Purifying mind and body at temples or shrines”. 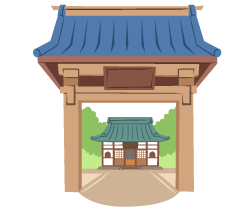 3. Ring the bell if allowed

Some temples allow visitors to ring the “bonsho” bell of bronze installed on their grounds, which is done by hitting it with the supplied mallet or by swinging the suspended wood beam. If that is the case, feel free to do so: take off hat or other cover and approach the bell respectfully. A single, vigorous hit per person is the accepted norm. Other temples prohibit visitors from doing it, so look closely for signs and off-limits warnings before attempting to do so. 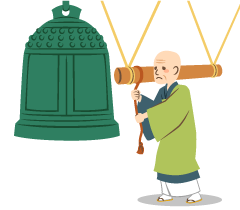 4. Make a votive offering with candles or incense sticks

5. Pray toward the Main Hall

Immediately after exiting the temple by its Main Gate, turn again towards the Main Hall, put your hands together and bow once more.

1. Do the reverence at the entrance and avoid the center line

As mentioned above on “Common notes about entering the temple or shrine”.

2. Do the purifying ritual by cleansing up

As mentioned above on “Purifying mind and body at temples or shrines”. 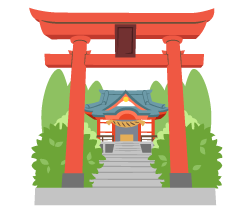 3. Pray at the front shrine.

If you are collecting red stamps to mark your visit, collect it after your prayer.

When exiting the shrine, if the Main Gate is a “torii”, exit by walking around the sides of it, not through it. Then turn again towards the shrine and bow deeply once more. This is a gesture that denotes humility and also helps at popular, crowded shrines when lots of people want to enter the premises by walking through the gate.

Shrines and temples sell amulets blessed by their enshrined gods. There’s a great variety of items available, like arrows (“hamaya”), wooden tablets (“ofuda”), bamboo rakes (“kumade”) and much more. But the miniature scrolls stuffed into colorful silk brocade pouches known as “Omamori” are by far the most common, and are roughly divided as follows (all of these are small enough to be constantly carried by the person):

A “Omamori” will be valid for a year, or until the goal has been achieved. After it, the user must return it to the shrine or temple, which in turn will burn it. Then another may be purchased. “Omamori” should not be opened, as it is believes that by doing so its powers are lost and, in the worst case, serious consequences may befall the person. 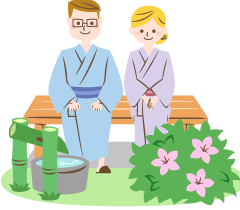 THE RIGHT WAY TO TAKE A BATH AT A HOT SPRING 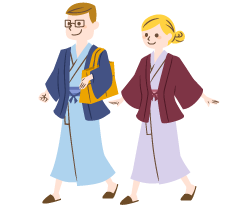 ETIQUETTE FOR AN ENJOYABLE STAY AT A RYOKAN 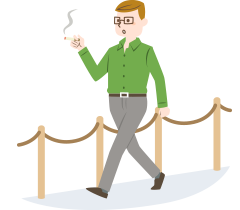 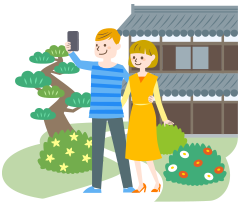 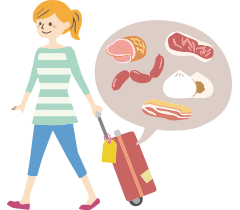