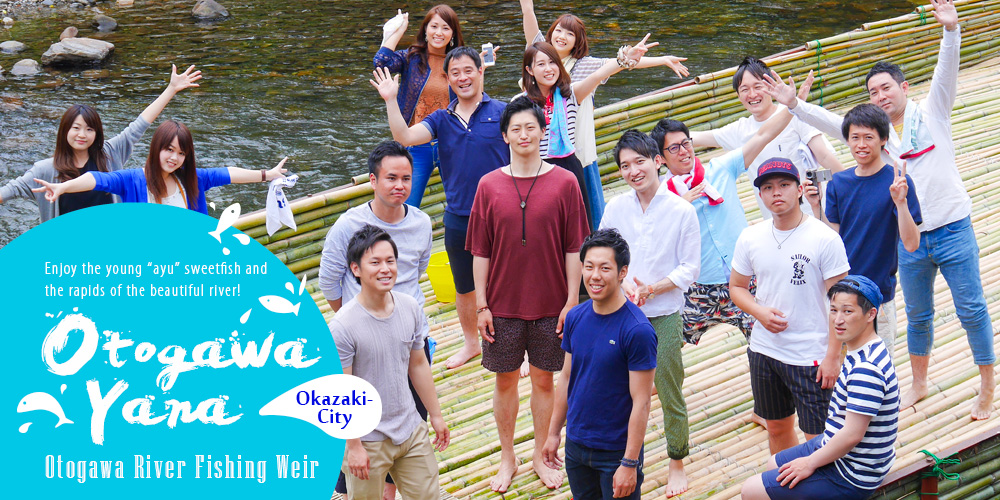 A stream of crystalline mountain water becomes a playground for you, friends and family!

The “Otogawa Yana” (Otogawa River Fishing Weir) started in 1976 as a Natural Holiday Village Project in former Nukata-Town, by joint initiative of the government of Japan and Aichi Prefecture. This year completing 41 years, the project is currently entitled Mt. Hongusan Natural Recreation Village, and remains as a very popular location among locals and tourists, being elected as one of “Okazaki City’s Best 100 Tourism Jewels”. Let’s see what awaits us there! 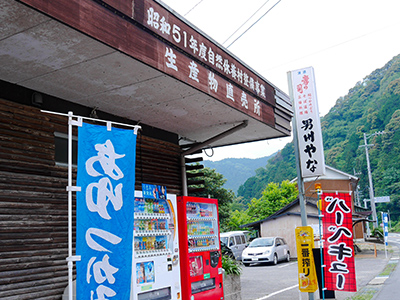 Get wet playing and doing the Catch-by-Grabbing of Sweetfish “Ayu Tsukami-Dori” at the river weir! 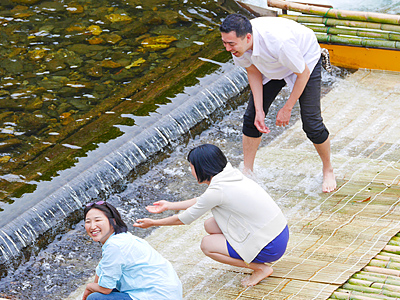 We finished greeting the busy “Okami” proprietress, Ms. Narumi Umemura, a swiftly-moving woman, multi-tasking among all sorts of small chores. She was preparing to receive a group of guests besides us, and unable to talk immediately. “For starters, you people better do the catching right away”, she ordered us, while dropping a bunch of beach sandals of all colors and sizes on the terrace overlooking the river and the weir. So, off we went taking our shoes off and rolling our pants up: time to get wet!

Stepping on the bamboo-made weir deck and getting our sore feet on the chilly mountain waters was nice and refreshing. The mechanics are simple enough: you just wait for the fish to fall into the trap then grab them. While staring at the water falling into the trap and wondering how on earth were we supposed to grab the fish, contemplating the possibility that no fish would fall to it, people suddenly started to yell “There they come! Catch them!” First one, then two, then before no time dozens were flopping and struggling on the deck! Alright then, I don’t know where they came from, but let’s catch them! Those pesky little fish are pretty slippery and energetic, so when grabbing them make sure to cover their eyes: it makes them much more quiet and easier to carry until you drop them on the bucket (also kindly provided). 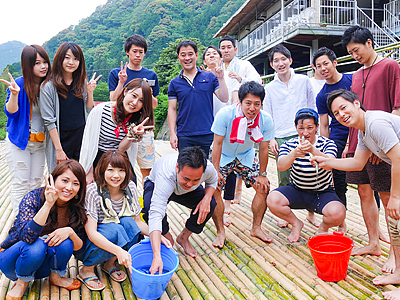 A fresh green weir for the upcoming summer days 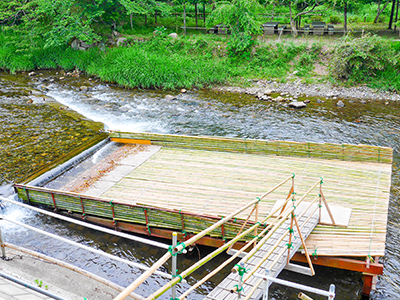 An improvised bridge allows guest to cross the river to opposite side from the shop’s main building. There’s a spacious area covered by wisteria pergolas, providing a much welcome shade. Just a pity that the season for wisteria doesn’t match the season for catching ayu, but judging from the large area covered, it certainly must be a nice sight when the flowers are in full bloom. Anyways, the vibrant wisteria trees cover the tables, benches and barbecue fire pits orderly placed to accommodate even the largest group of guests.

A bit further deep behind this area is the bamboo forest from where the material used to make the weir is harvested. We heard that it is made anew each year, and uses about a 120 or so of them. In late April the cut bamboo is laid over the frame to make the new weir, and has a light green color, kind of fit for the upcoming hot summer days. As the season progresses, it goes gradually turning its color to a golden yellow, just like welcoming autumn.

The decision to carry on a dying father’s wish

Tackling all the tasks required to keep this place running is the “Okami”, Ms. Umemura. Management, cooking, coordination of the helpers, courting the guests, she does everything. But what would make an Elementary School teacher end up taking care of a place like this?

“The Otogawa Yana was founded by 11 members of the Fishermen Union, and my father was one of them. Too many people involved led the management to fall apart and as result, guests would slowly dwindle to almost zero”, she says. When rumors of the desire to sell it away in order to escape bankruptcy surfaced, her father, already very ill, said “I don’t want it to go to the hands of strangers”. Ms. Narumi, who had left her job teaching kids to take care of him, immediately retorted: “Well then, I’ll do it!”. That was source of some harsh criticisms: “You don’t have experience, you won’t be able to do it!”, and the sort. “When talked down like that, the rebel in me just couldn’t stay quiet, so I defied each and every one of them: ‘I can!’” 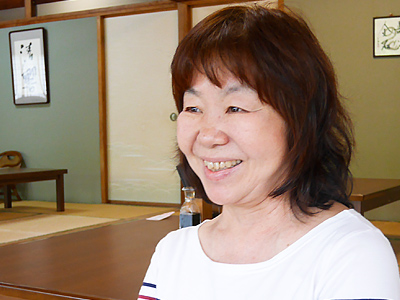 A struggling layperson on a mission! 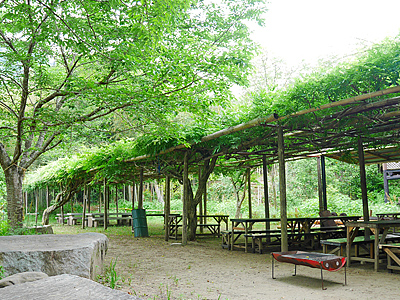 Turns out, Ms. Narumi’s father was a prominent member of the Fishermen Union, getting up to the position of Chairman of the National Fishermen Union. So that means she received quite a formidable training in the business, right? “You’d think so, but no!”, she laughs. “I didn’t know nothing: where to buy fish, how to negotiate suppliers, what kind of license and papers you need, nothing!”. And continues laughing: “My father just said ‘Decide everything by yourself!’. Because of that I had quite a share of hard times!”. Recognizing now that this was a subtle but impacting way of expressing his love, she adds: “I did everything carelessly because I didn’t know better. For example, contracting a bulldozer to clean up the other side of the river and planting the wisterias: was I a professional who knew things, I would never do that!”. We ask why, and she says: “One of the reasons is the absurd amount of legal papers and environmental licenses you’re required to get to be able to do it. I just had to regularize everything after the thing was done, and that was source of a lot of headaches”, she laughingly dismisses. Well, we just can’t help but feel that her boldness added a lot of character to what Otogawa Yana came to be.

Maybe because it’s the father’s legacy?

That’s not to say that guests started to come right away. Long days passed and no sign of them. The Okami reminisces about that time: “The sound of the river down below was just sad, sad, sometimes some tears would escape me...”. Colleagues of her old workplace, getting word of the distressing situation, organized parties. Some would show up with their aprons in order to get their hands in helping. This went for 3 years, but the situation just wouldn’t improve. People around her started to get worried: “Why don’t you just give up?”. “Of course I didn’t want to retreat, my stubbornness wouldn’t allow!”, she smiles. But behind that smile, we felt that clutching to the shop even during those days when results were nowhere to be seen, is also because she wouldn’t easily relieve herself of the task entrusted by her father. 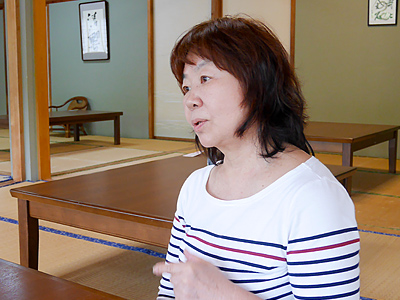 The human connections that saved the day 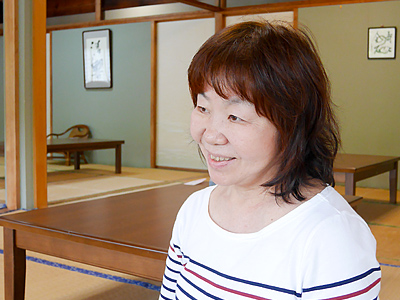 The turning point for the Okami came when one of the local television stations, CBC, recorded an episode of “Hashire! Scoopers” at the Otogawa Yana. The production was famous for covering popular or otherwise curious spots around Tokai Area. “The power of the media is an amazing thing. The Otogawa Yana which only knew the sound of its cuckoo clock chiming suddenly got lively when people started to show up, on the very next day after the program aired!”. From that moment on, she hit a series of homeruns. “But I had to endure until that moment, and I was only able to do it because I had a lot of people helping and supporting me. I am very grateful to all of them”, she tells us emotionally. “The bonds and friendships you make with people when you go through tears and laughs together is the most precious thing. Business going smoothly like now won’t change this feeling nary a bit”, she exalts.

After eating the delicious sweetfish dishes carefully prepared and having this nice conversation, we prepared to leave. The Okami then added “When you get tired and fed up with life, stop by and let’s talk and eat some nice food, ok?”. Yes, we’ll come back, to meet you, you amazing woman!

Sent away by the kind smile of that brave lady, we took our way home happy and fulfilled.

During the in-between season period from October to May when playing in the water is not allowed, Otogawa Weir offers the "Soba-uchi" Soba Noodles Kneading Experience and the Yam Cake "Konnyaku" Experience. Of course, another of the Okami's great ideas! The soba in particular is made using buckwheat produced in Nukata-cho itself, adding to the local experience! 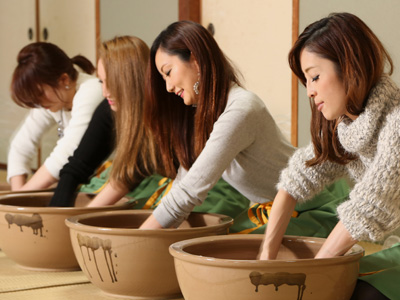 See details of the Otogawa Yana Fishing Weir at the link below: