When the matter is Kinshachi Beer, a great number of Aichi locals can't help but remember the brewery's new recipe that generated a lot of talk when it was launched in order to commemorate the Aichi EXPO 2005, the Nagoya Akamiso Lager, made with the red soybean paste famous for being a staple food in the whole of Aichi, but especially in Nagoya-City area. Maybe because of the eccentric name, or more probably due to the akamiso usage, we trembled a little as we took to sip the dark-colored brew. But alas! It is a delicious, exquisite ale with a soft but bodied flavor, with a highly refined texture.
"In order to make a beer that truly represented Nagoya we naturally resorted to akamiso, and miso, just like beer, is a fermented product. It is obvious that they match each other fine. It is still one of our best sellers", say both Yamaguchi-san and Sugiyama-san, the plant's Master Brewers, in unison. 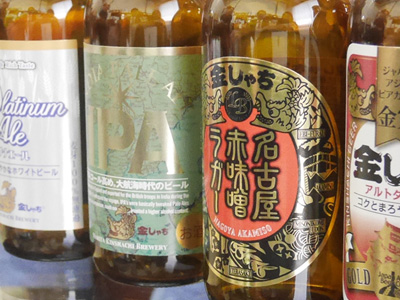 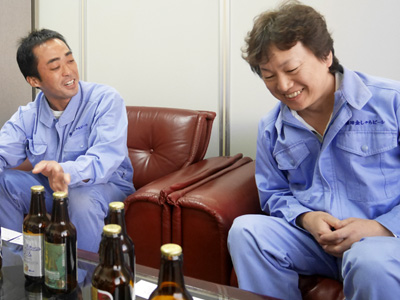 Surely, there's a hint of akamiso flavor in the aftertaste, but other than that, it is like a dark Belgian ale. We started regretting not having brought any sort of Nagoya-Meshi snack, such as Tebasaki Chicken Wings. Yamaguchi-san continues: "It goes very well with Nagoya-Meshi. As we experiment with akamiso, or matcha green tea and etc. doing lots of unusual things, it may even appear that we are show-offs on purpose, but that's not the case. We just aim for a truly tasty beer that's fully enjoyable from the first gulp and continues to amaze even after the second bottle. Something sheeny and soft that opens the appetite and goes along accompanying a nice meal".

A 100 year dream: the return of the Mitsuboshi Beer

The current Morita Kinshachi Beer started in 1996 - initially under the name Land Beer, changing to the current name in 2006 - as an incursion into the beer business by Morita Enterprises, the wine and nihonshu sake dealer subsidiary of the giant Morita Corporation. However, this was not the first Morita attempt into making beer. Between 1884 and 1885, Kyuzaemon XI Meiki, then head of the Morita Clan, attempted to launch his own brand of ale with the Mitsuboshi Beer (lit. "Three Stars"), but the project had to be abandoned due to the financial setback caused by an insect infestation in the family's recently started vineyards, which were planted in order to start a wine business. 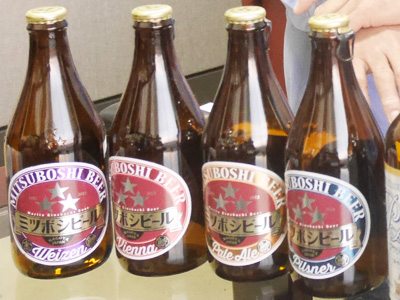 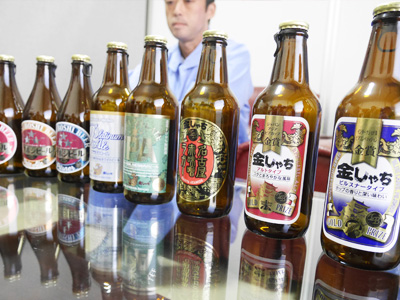 With this amazing background history, the management set the goal of recreating the legendary Mitsuboshi, setting new standards in the market, aiming for a beer that ideally matched the delicate palate of the Japanese people, instead of just blindly trying to recreate the flavor of some foreign ale.

Inside the brewery - the secret of the taste

The basic ingredients for beer are four: wheat or barley, hop, water and yeast. Balancing the amount in the mixture, as well as timing of the addition and temperatures involved in each step of the process is what gives beer its almost infinite variations in aroma, flavor and texture. And this is where the Master Brewers skills really shine!

The flavor of the malt (wheat or barley)

Malt is wheat or barley grain that was germinated and then dried. Depending of the quality of the grain, the flavor and aroma of the beer also changes drastically, so it is chosen according to color and other key characteristics. We were offered a chance to see up close the different grain used at Kinshachi Beer.

First, the type most used by the majority of Japanese beers, the Pilsner Malt, or Base Malt. The bread-like flavor fills the mouth with a familiar taste. Used for the more clear-colored beers.

Then the Ale Malt, a bit darker than the previous one, and with a more bodied taste. The deep flavor goes into the beer just as imagined.

And last, the Roast Malt, an almost black grain with a really pungent and almost bitter taste. Used to make stouts and other types of dark beer.

Hop: rich aroma and a bit of bitterness

Hop is the source of much of the final beer's flavor and aroma, lending its bitterness and being a fundamental part of the beer experience. Again, different types of beer will use distinct varieties of hop.

Upon entering the brewery floor, we stumble upon three giant tanks, the steam-powered kettles. The ground malt is added to the first kettle with water to create the mash, which is then transferred to the other tanks in succession, according to each required step, mashing, lautering, sparging and etc. via a set of pipes and pumps. These processes activate enzymes in the malt that trigger the conversion of starch into fermentable sugars. 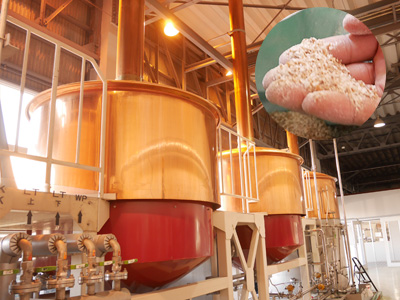 Adding to the mash

Hop is added to the dense mash soup and boiled, with big rotating pads stirring it. A highly aromatic but bitter juice is produced. 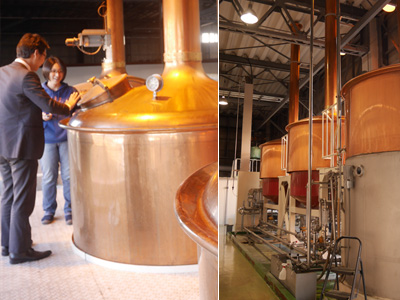 Finally, the mixture is cooled and transferred to the fermentation tanks, where yeast is added. The microorganisms will eat through the sugars and release carbon dioxide and alcohol. The young beer is made by fermenting for a period that can vary between a week to 10 days. 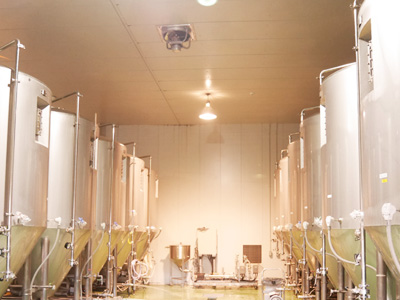 The young beer still has a rough flavor, so it is left to rest and mature for 2 to 3 weeks at temperatures near to zero degrees Celsius. At the same time, CO2 is slowly diluted into it in order to create a soft texture. Flavor and color are refined in this process. However, Master Brewers will say that being able to indulge with the beer at this stage is the pinnacle of beer tasting, given the infinite hues in the aroma and flavor.

The remaining yeast sediments on the bottom of the tanks and is removed. Then the beer goes through a filter, is packaged and shipped.