Right now, craft beers made by experienced Braumeisters are hotter than ever! And of course, Aichi too has its proud number of breweries. We went to Inuyama-City, home of the two most famous microbreweries of the prefecture, to taste and decide our favorite labels!

The "Untraveled" here has two meanings: first, we are able to taste beer that hasn't been moved around, drinking were it was brewed - and any beer connoisseur will tell you that the less a beer has traveled, the better it tastes. And second, we don't have to travel far, as it is right here in Aichi!

The Inuyama Loreley Bakushu* was born in 1998, in the time when the 4 giant brewers - namely Asahi, Kirin, Sapporo and Suntory - exerted a virtually exclusive control of the entire domestic beer market. Then in 1994 the severe Japanese tax laws for beer were relaxed, reducing the annual production volume required for a beer brewing license from 2 million to 60 thousand liters, causing microbreweries to start appearing everywhere across Japan.

*: The "bakushu" (麦酒) term means "wheat" (麦) and "liquor" (酒). Surprisingly (or confusingly) enough, the kanji characters of some brands are intended to be read as "biiru" (ビール), which is the adapted Japanese for the English word "beer". 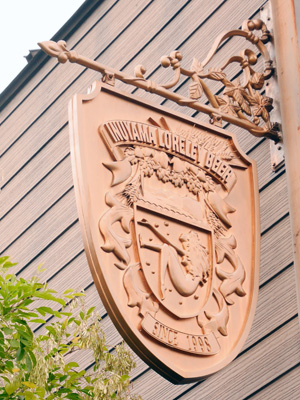 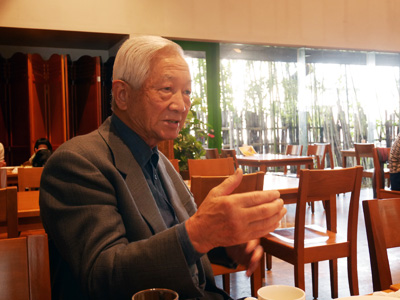 Keenly observing the market developments at that time was Mr. Atsuo Yoshino, President of Koimitsuru Sake Brewery Company and 6th Successor of the Yoshino Family, a house that had been brewing sake since the Edo Period. Using naturally grown Lactobacillus, and sticking to an ancient form of sake brewing called Yamahai-Shikomi characterized by its deep and strong flavor, Mr. Yoshino kept on making sake by such delicate process which is only possible because of the small scale of his operation. Marveled at the depth in the making of world beers that till then had not yet entered Japan, he then got his hands on producing a beer brand that would be genuinely rooted in Inuyama, correctly thinking that "the experience and technique acquired with making sake will surely make possible making beer too". Motivated by his pride as sake-maker and a never-waning challenging spirit, he took the first steps onto the beer-making venture.

Flavor influenced by the rich aquifers fed from the Kisogawa River

The aim was to make a bodied and tasty beer like the traditional German brews added to an inherent characteristic of Inuyama. But, why Germany? "This has something to do with Inuyama City being a sister city to Sankt Goarshausen City, but above that, it is because the landscape around the Kiso River is very much alike the areas watered by the Rhine River. Strangely enough, the water characteristics of both rivers are also very much alike, so I felt that was a fateful fact." The Haguro District in Inuyama is blessed by the abundant aquifers fed by the Kiso River flow, which from ancient times was cause for sake brewers to gather in that area - large beverage makers still keeping plants there attest to the fact. 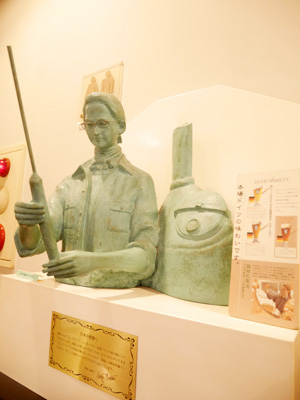 Confident that the a tasty German beer should be possible in Japan just because of Haguro, Yoshino looked for a Braumeister in Germany and hired the talented Nadja Becker - who would later be known as the blond Loreley Brewmaster Lady - procuring also the copper kettle, as well as ingredients such as malt and hop, from Germany, completing the requirements for pursuing the true German taste.

"Ms. Becker was a gentle, generous person, but she wouldn't accept any compromise in temperature control and timing - which could affect the taste of the beer - and this is the quality of a respected craftsperson", says Hirokazu Matsubara, who apprenticed under Becker and currently is responsible for the whole brewing process at Inuyama Loreley.
And so it came that, after three years of development the Inuyama Loreley Bakushu was at finally born. At about the same time, the restaurant built adjacent to the brewery was also finished. 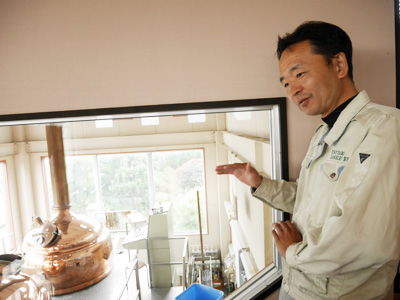 A bodied taste that comes from the unfiltered beer 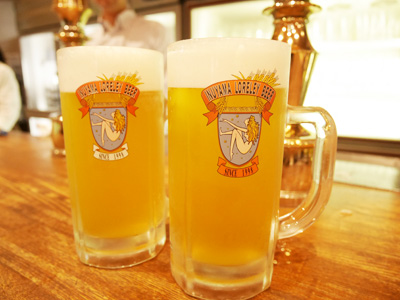 Inuyama Loreley is unfiltered and unpasteurized, so it falls under the "bottle-conditioned" and "live beer" categories - the term in Japanese is "Nama-biiru", which literally means "raw beer". This goes in contrast with most of the "nama-biiru" brewed in Japan, which is at least fine-filtered, aiming at stabilizing the taste and facilitating the quality control.
Filtered and unfiltered brews can be distinguished just by their appearance. Beers from big brands almost always feature a clear yellow look, but German beer is opaque, sometimes because of the yeast still floating in it.
But then there's the taste. Compared to the Japanese beers that simply go in when drinking them, even the lightest of the German beers have a bodied, strong and aromatic taste.

Mr. Yoshino adds by stating that "in Germany, there's a say: "A Beer Brewery is a Pharmacy", because the unfiltered beer has living yeast in it, giving properties somewhat similar to medicines. The German people will not recognize a beverage containing anything other than water, hop and barley as beer - there's even a law for it: the German Beer Purity Law, enacted in order to preserve the traditions of the country. So, I think that the beverage loved by the Germans is the one true holder of the beer taste." Noble words from one who pays utter respect for German beer and had been brewing beer by strictly following its traditions. Being able to continue making the same beer even after the Ji-biiru* boom had receded, and after several micro-breweries being shut-down across the country, is in great part due to the desire in wanting only the best and true product, just like we did with our sake brews.

*: Ji-biiru (地ビール) literally means "Local Beer" and, before the advent of Craft Beer, was the term used to indicate a beer from a low-output brewery, as defined by Japan Law. 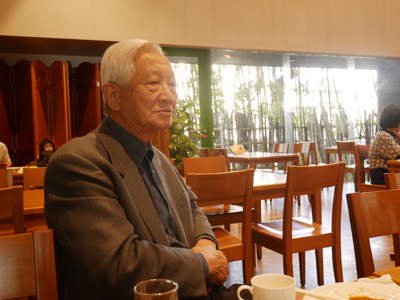 "Tsukuritate", or "Just brewed": when the taste is the best! 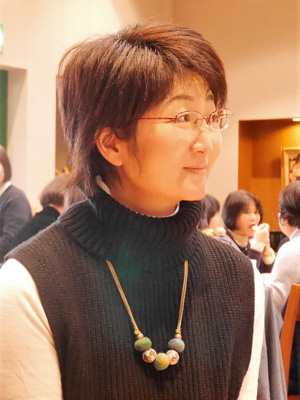 With craft beer gaining lots of popularity across the country as of lately, the brewery often finds itself participating in events outside of the prefecture. In charge of the company's Events Dept., Naoko Komuro argues that "of course, we want people from other parts of Japan to know more about our products, but that's not the objective. In Germany, they say that 'beer doesn't travel well', meaning that beer tastes its best at the region where it was brewed. So we want to preserve the taste that can only be enjoyed here, as well as to make people wanting to come here, in order to have the perfect experience of having a 'just brewed beer' while appreciating the beauty of Inuyama."

The Inuyama Loreley is, as stated by its namesake, a "Ji-biiru" with deep roots in the natural features of Inuyama, and a Craft Beer in which the Braumeister's craftsmanship shines. Why not stop by and have a taste of this marvelous elixir? The Untraveled Craft Beer of Aichi! 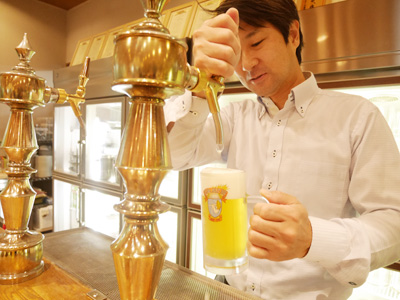 Which will you choose? Comparing the craft beers

Perfect ease of drinking, the Pilsner 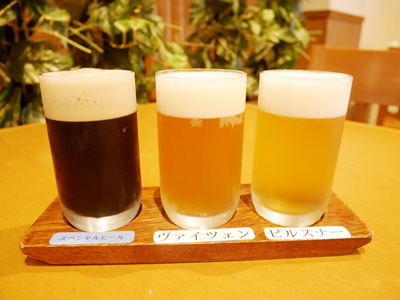 According to Ms. Komuro, "we recommend the Pilsner to people who like the Japanese beers", and so we started by tasting this one. The aroma that permeates the top suddenly tells us it is a craft beer indeed. But the taste is clear and light. The person drinking this one must be careful to not drink or eat too much, for the lightness is perfect.

Mellow and fruity, the White Beer

Also called Weizen or Weisbier, it features a low-bitterness and easy-to-drink taste. It's rich but mellow, with subtle fruity aromas spreading in the mouth. If the Pilsner is the choice for having in big gulps on hot summer days, the White Beer is perhaps a nice choice to enjoy slowly in autumn and winter days. Some more enthusiastic fans go as far as stating that they "can't have anything other than this".

Special, limited edition brews carefully concocted by Braumeister Matsubara are among the most eagerly awaited beers of the brewery. Some examples include the Sakura Honey Lager, made using honey of the Gojogawa River sakura cherry blossoms, or the slightly bittersweet Chocolate Malt stout made with chocolate roast malt. A recipe made in collaboration with the city of Kasugai had cactus as ingredient - given that the city is famous for its cacti - figures among the other unusual recipes developed by the brewery. Anything becomes tasty beer at the hands of the talented Braumeister! 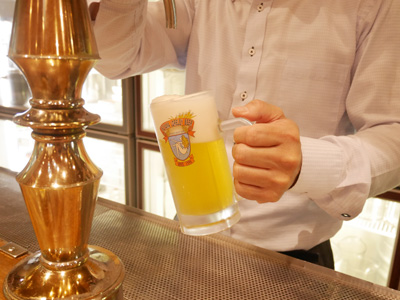