On average, the Tokai Region enters the monsoon between late May to early June, marking a period of high humidity and incidence of precipitations. During such period, and for a limited time, Nagoya TV Tower holds the Ajisai Garden event displaying potted "ajisai" hydrangeas at its Sky Balcony observation deck. As hydrangea flowers are characterized by the multiple calyxes sprouting to form a single cluster, Japanese people associates it to the bond formed between individual people, so the plant is highly regarded as a symbol for friendship and love ties, and other affective encounters. As such, take the ones you love with you and climb the tower in order to make some amazing memories together!

Period: From June 1st (Friday) to June 30th (Saturday), 2018
Requirements: For guests entering the observation deck under rain, or in a day with a 50% or higher probability of rain forecast (as announced by the JMA - Japan Meteorological Agency).

1-Limited to Rainy Days - Photo Booth Open
To take cute pictures even on rainy days. A space for photos and a number of rainy day props available for use.

2-Rainy Day Dress Code Discount
50% of discount on the admission to the observation deck for guests who show up wearing tall rain boots and rain cape.

*: Monsoon in Japanese is "Tsuyu".

CLOSURE NOTICE: All facilities of Nagoya TV Tower, including the immediate surrounding park area, are closed as of January 7 (Monday), 2019, for seismic retrofitting works. Reopening to normal operation is estimated for Summer of 2020. 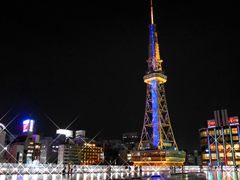 Nagoya TV Tower (Nagoya Terebi-to)
Japan’s first commercial radio broadcasters began not in Tokyo nor in Osaka, but in Aichi ... 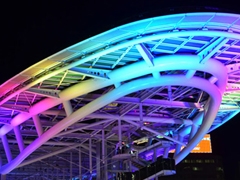 Oasis 21 / Sakae
At first glance it appears that the Spaceship Enterprise from Star Trek has landed in Aich...