Gagaku means the "Orchestral Music" (considered the "Legitimate Music") for the popular music, and its origins are estimated to lay in the merging of original music practiced by Japanese people of ancient times with art originated from various countries of Asia, which made their way into the Japan of old. Upon creation of the Bureau of Court Music (Gagaku-Ryo, also called Utamai-no-Tsukasa) by the Code of Taiho (Taiho-Ritsuryo Law, 701), the formal structure of Gagaku was organized and regulated. When the Heian Period commenced, foreign music formats were gradually adapted to Japan customs and forms, being inherited and passed down the generations to this day.

Masumida Shrine has several Bugakumen Masks that were crafted during the Kamakura and Muromachi Periods, which leads to the conclusion that Bugaku were actively performed throughout the eras. The masks kept by the shrine are various, such as "Ryoo 陵王", "Genjoraku 還城楽", "Hassen 八仙", "Nasori 納曽利", "Kitoku 貴徳", "Bato 抜頭" and others, with a number of them even being designated as Important National Cultural Properties. Throughout history, Masumida Shrine constantly had a role to play in the evolution and dissemination of Gagaku. This fact is clearly illustrated by the Kumemai (久米舞) kagura performance (Kumeuta 久米歌). This dance was a tradition amongst the ritualistic procedures at the Imperial Palace and Shinto shrines, but its performance is abolished once the Muromachi Period began. The revival during the literary years of the Edo Period is owed to Hidene Kawamura (河村秀根), a natural of Nagoya and scholar of Classic Japanese studies who served the Lord of Owari. Having a close friendship with the Shrine Priest's family, he found a Kumemai performance music score inside the Eboshi Hat Box (Eboshibako) of Sannogon Hayashi (林三之権). Eventually, his son Masune Kawamura (河村益根) made the episode public, a fact believed to be the trigger that ultimately led to the reinstatement of the act in Shintoist rituals it shrines and at in Imperial Household procedures. 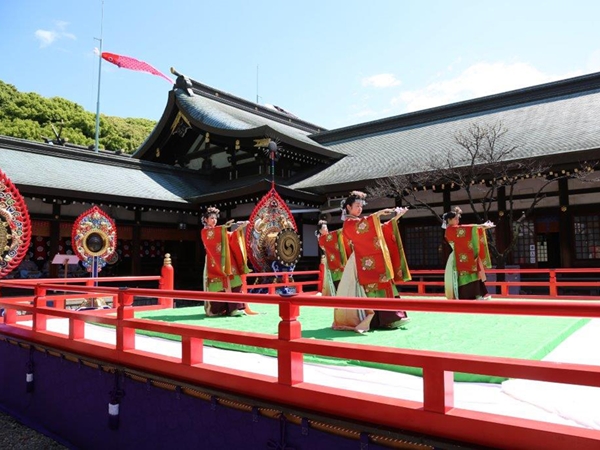 Masumida Shrine Buraku Shinji Ritual - The Buraku masks preserved in excellent state at Masumida Shrine originate from a period when woodcarving techniques in the country reached the peak of development, with twelve masks registered as Important National Cultural Properties, and other seven as Cultural Properties of Aichi Prefecture. In the "Omen of Masumida Shrine" documents, it is stated that Buraku was customarily performed in every Shintoist or Buddhist ritual. During the Edo Period, the Bugaku was performed with special pomp during special consecration celebrations. Notwithstanding the fact that the Kumemai dance performances suffered a long period of time being abolished from the Daijosai Festival (the Great Thanksgiving Ritual, performed during the rituals of the Emperor's ascension to the throne), in November of the First Year of the Bunsei Era (1818) it inevitably made a return at the Daijosai Festival of Emperor Ninko, with the discovery of the Kumemai score inside Masumida Shrines' Eboshi Box believed to be one of the factors that led to the reinstatement. Episodes such as this patently denotes Masumida Shrine's intrinsic relationship with the history and tradition of Buraku and Kagura performances since ancient times, and nowadays numerous programs are dedicated to Buraku Shinji rituals on April 29th, every year.