First, there was the indigenous chicken of Owari, the region that is now western Aichi. Then, the Cochin fowl, imported from China. During the Meiji period (1868-1912), locals had the bright idea of crossing those species. The resulting breed was a success. Even as today, Nagoya Cochin remains a beloved source of meat and eggs, and an invaluable addition to the enticing variety of Nagoya eats.

Specialized Nagoya eateries will serve the bird as “hikizuri” (sukiyaki-style chicken), hotpot “nabe”, simply broiled with salt as “yakitori”, marbled, maybe fried with seafood, and as the ultimate tasting way, blanched and served for degusting with horseradish “wasabi” and soy sauce. For the exotic-oriented connoisseurs, some shops serve courses of raw Nagoya Cochin, where you can be marveled at its natural essence. Needless to say, the process is perfectly hygienic, as the stock is raised in pristine environments and carefully prepared by the highest standards.

The inherent quality of Nagoya Cochin is really not surprising, as this once widely available staple breed now has a prideful and strictly controlled market, whose players protect by fighting tooth and nail. This was caused by the afterwards introduction of other, more practical species of fowl stock, which widely replaced the Nagoya variation for being cheaper and faster to grow. Thus, only farmers determined to carry on the bird’s superior qualities strived for raising it, and consequentially turning it into a premium item, nowadays safeguarded by laws and ordinances. Hence, any act with a potential to undermine or demoralize the industry around this highly estimated bird is strongly discouraged.

Well, regardless of the preparation, the reddish meat, with its chewy texture and amazingly strong, delicious bird flavor, will make you wonder at what is that thing at supermarkets that people call “chicken”.

This is a restaurant filled with the ambience of Edo period post towns. Customers are drawn into one of the seven unique seating options: comfortable counter seats, separate private rooms, tatami m... 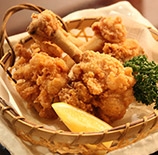